Asylum Seekers See a Truth Americans Don’t: Our Mass-Incarceration System is Out of Control

It’s pretty hard to find the Cibola Correctional Center in the village of Milan, New Mexico. You can’t get a strong wifi signal on your phone, so unless you printed out directions ahead of time you might end up driving around for a while. Eventually you will catch a glimpse of the huge prison complex with a Navajo Reservation as its backdrop. Still, you might assume you’re in the wrong place. It shocks the conscience that this jail—double- and triple-ringed with concertina rolls and barbed wire—is where our government chooses to detain asylum seekers and migrants who have come to our country in search of safety and opportunity.

The Cibola Correctional Center is a new immigration jail, run by a private prison company called Core Civic (formerly Corrections Corporation of America), which is reaping massive profits to imprison up to 1,100 souls there at any given time. It is one of two prisons previously closed by the Department of Justice after operating costs and reports of human rights violations piled too high, only to be reopened earlier this year by the Department of Homeland Security (DHS) to lock up immigrants. In June, National Immigrant Justice Center (NIJC) attorney Keren Zwick and I flew to New Mexico and drove 90 minutes to visit the facility to learn who is being held there and to attempt to provide some basic legal orientation to help them navigate the complicated immigration system.

Among the immigrants I met was a young asylum seeker who fled his home when acts of peaceful protest put his life in danger. He traveled nearly six months to finally arrive and ask for protection at the southern U.S. border. When I asked him what he thought of his current surroundings, he said repeatedly, “C’est pas normal.” “It’s not normal.”

Congress Must Defund an Incarceration System that has Normalized Hate

Of course he’s right. America’s corrupt and dangerous system of immigration detention, which has more than quintupled in recent decades, has not been normal for a long time. This system is composed of a sprawling network of more than 100 county jails and private prisons incarcerating approximately 40,000 men, women and children on any given day. Long sustained by the profiteering motives of private prison companies, immigration jails notoriously cut corners on basic health and safety protections.

And if the White House gets anything close to the budget it wants, the system will soon grow even more unwieldy. The U.S. House of Representatives now is negotiating a federal budget in which DHS’s Immigration and Customs Enforcement (ICE) has asked to expand the capacity of its immigration jails even further - by nearly 25 percent in 2018 - while simultaneously seeking to roll back basic standards for how it treats immigrants in its custody.

This is why NIJC has joined the #DefundHate campaign to call on members of Congress stop funding ICE’s detention and deportation machine.

ICE chief Thomas Homan believes all undocumented immigrants should live in fear, telling them “you should look over your shoulder.” He uses the detention system to facilitate this fear and expedite deportations at unprecedented rates. ICE now automatically jails asylum seekers for the duration of their immigration proceedings. ICE locks immigrants, including survivors of torture and other past violence, away in punitive conditions, isolated from lawyers, while they face civil deportation proceedings that determine whether they are permitted to remain safely in the United States or forced to return to places where their lives are endangered. In the U.S. immigration system, people facing deportation are not provided court-appointed lawyers and are left to fend for themselves in obtaining counsel. Detention conditions are so punishing that men and women routinely abandon their protection claims just to end the agony.

Americans may be used to this madness, but to the newly arrived political asylum seeker we met at Cibola, the aberration from American values was immediately clear.

Cibola Shows Us Things Could Get Worse

Between the two of us, Keren and I have worked in more than 20 immigration jails. For years, NIJC lawyers have driven countless hours from Chicago to provide legal services to immigrants in jails throughout the Midwest, from Illinois to Wisconsin to Kentucky. We have used public information laws to unearth flaws in the archaic detention contracting and inspections system. Most of the system’s jails and prisons are in remote locations, where immigrants struggle to find or communicate with outside advocates, and we struggle to maintain adequate contact with our clients.

But even in the context of what we already knew, our visit to Cibola shocked us. The prison’s population is far below capacity, yet it already feels impossible—to us and local lawyers who want to help—to provide adequate legal services there.The physical isolation of the facility is stunning. We wondered how it would be possible to ever sufficiently staff a jail given the sparse population of the surrounding town, and with few medical professionals working nearby. In the facility itself, ICE and Core Civic staff reacted with alarm to the clearly unusual presence of attorneys. We encountered surprising hostility from the facility’s officers when we attempted to meet with individuals for legal consultations. We left feeling that we had witnessed the Trump administration’s sinister contributions to an already cruel enforcement and detention machine.

As Congress is poised to make decisions about how to spend our tax dollars, we must demand that they refuse to be complicit in funding prisons like Cibola. We must urge them to stop supporting the intentional degradation of human rights and due process in our country. NIJC is committed to fighting to stop this detention expansion as we work tirelessly to reach those who are swept up in it.

TAKE ACTION: As a partner in the #DefundHate campaign, we ask you to help us by urging your members of congress stop funding ICE’s detention and deportation machine. 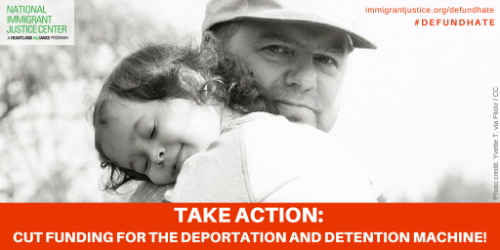 Heidi Altman is the director of policy at NIJC.