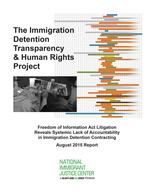 With this August 2015 Report, NIJC analyzed (and released) thousands of pages of documents to provide an unprecedented look into a failed system that lacks accountability, shields DHS from public scrutiny, and allows local governments and private prison companies to brazenly maximize profits at the expense of basic human rights.

NIJC’s pursuit of transparency and accountability began in April 2011 with a FOIA request seeking all U.S. Immigration and Customs Enforcement (ICE) detention facility contracts, as well as inspection reports dating back to 2007. Notwithstanding President Obama’s 2009 directive to increase government transparency, it took four years, one federal lawsuit, two depositions of ICE officers deemed experts in immigration detention contracting and inspections, and a federal court order to obtain documents for more than 100 of the country’s largest detention facilities. The average daily population for these facilities represented approximately 92 percent of the 33,400 detention beds ICE maintained on an average day in 2012 (the most recent year for which NIJC obtained documents). For the first of a series of reports, NIJC reviewed and posted 90 contracts, four partial contracts, and the deposition testimony of a former ICE contracting officer who describes the agency’s contracting processes.