U.S. Immigration and Customs Enforcement (ICE) holds tens of thousands of people daily in the equivalent of pretrial detention, without appointed counsel and often without access to bond hearings. ICE uses taxpayer dollars to jail and deport people who have lived in the United States for decades, including parents of U.S. citizens, and people who arrived recently seeking safety or a better life. They are held in one of more than 200 prisons, jails, and prison-like complexes rife with systemic racism and abuse. These facilities are largely operated by private companies and are remote and isolated. 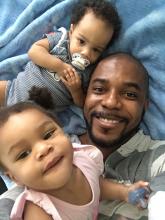 “While I was detained, my wife gave birth to our second child and our family lost our home. I met our new baby in a picture by mail. I saw a man who was detained with me hang himself to try to commit suicide. I feel traumatized still today from all that I saw.”

-Johannes Favi,
a father detained by ICE for nearly a year
while awaiting his green card

The U.S. immigrant detention system began to grow into its current form only a few decades ago. It has evolved into a behemoth that makes communities less safe, not more. The federal government should not abuse or mistreat people, or deprive them of their liberty solely because they are facing civil immigration proceedings. It should not further punitive systems of incarceration and enforcement that perpetuate racism against Black and Brown immigrants. Rather, the government should permit people to pursue their cases from the safety of their homes and communities, with case management available when needed.

NIJC calls on policy makers and elected officials to take immediate and dramatic steps toward ending immigrant detention. Here are five reasons why, based on NIJC’s new independent analysis of ICE data.

1. The current detention system is historically anomalous, the result of the same policies and rhetoric that built systems of mass incarceration.

The immigrant detention system as we know it today constitutes a relatively new experiment in American history. Although current political rhetoric has normalized the detention of immigrants as part of the United States’ social and political landscape, it hasn’t always been this way.

In the late 1800s, immigrants arriving to the United States were held briefly on Ellis Island and Angel Island for medical checks and then released. When Ellis Island closed in 1954, the U.S. government formally abandoned the policy of immigrant detention, relying instead on conditional parole, bonds, or supervision. Then-Attorney General Herbert Brownell, Jr., described this policy shift as a “step forward toward humane administration of the immigration laws.”

The presumption of liberty for immigrants remained in place for most of the second half of the 20th century. Then, in the 1980s, the U.S. government turned to mass detention to respond to the flight of thousands of Haitian refugees escaping the brutal Duvalier regime, with the explicit goal of deterring Haitians from seeking asylum in the United States. The immigration incarceration system grew around the targeting of Black Haitian immigrants and Cubans escaping by boat from the port of Mariel. During the same time period, the Reagan administration’s “tough on crime” policies doubled the prison population as communities of color were increasingly overpoliced and criminalized.

Over the course of the 1990s, the same policies and political rhetoric that resulted in the mass incarceration of Black and Brown communities in U.S. jails and prisons fueled the expansion of immigrant detention into the system we see today. In just fiscal year 2020, ICE used more than $3 billion in taxpayer dollars to fund the detention of nearly 170,000 immigrants, detaining each person for an average of three months, and in many cases much longer.

2. Building community safety for all of us means moving away from policies of control, detention, and deportation.

A clear-eyed, evidence-based assessment reveals that immigrant detention undermines public safety. Immigration enforcement actions destabilize communities. Detentions and deportations create financial and housing insecurity for families and lead to a general sense of fearfulness and lack of trust in public institutions. This fear triggers harmful consequences, as communities become afraid to send their children to school, attend religious gatherings, and access emergency medical care. Detentions and deportations do not make communities safer, they rip security away.

Immigration court proceedings are civil in nature; the sole purpose of detention is to ensure that people appear at their court hearings and comply with immigration judges’ orders. The government is detaining people while they pursue asylum claims after arriving in the United States, or because of alleged violations of a visa or other lawful status in the United States. No one in ICE custody is serving time for a conviction or facing a criminal charge. On the contrary, the detention system — despite now being characterized by barbed wire and massive prison complexes — was never meant to play a role in public safety, and legally is prohibited from being punitive.

The graph to the right shows the average daily population (ADP) in detention in FY 2020 based on ICE’s own categorization of threat level. According to the government, more than half of people detained by ICE presented no threat. Only 17.6 percent were considered by ICE’s own matrix to fall within the most serious threat classification. People in immigrant detention who do have past criminal convictions, even serious ones, have either already served out a sentence ordered by a criminal court judge or will do so once they are released from ICE custody. There is no justification for imposing a second penalty on immigrants convicted of crimes solely because of their places of birth.

Study after study shows that immigrants bring a vibrancy and inter-connectedness that correlates to lower crime rates even in disadvantaged communities. This protective influence has been shown to be enhanced in localities that adopt a welcoming, rather than punitive, approach to immigrants. The evidence is clear: policies of immigration control that promote detention and deportation make our communities less safe; policies of welcoming and inclusion enhance the public good.

3. Immigrants should be permitted to live in their homes and communities during case proceedings, with community-based case management available when needed.

There is a better way. Immigrants should be permitted to live in the safety of their homes and communities while navigating their court proceedings. Approximately 90% of asylum seekers arriving at the southern border have a loved one with whom they can stay in the United States. Immigrants facing court proceedings due to interior enforcement operations are established community residents, many of whom have jobs that have been deemed “essential” during the coronavirus pandemic, and whose earnings help support families and children.

For immigrants and asylum seekers who do need social services or case support, many community-supported case management programs are available, though currently underfunded. Evidence-based studies consistently show that community-based programs are up to 80% less expensive than detention, and that 90% of participants comply with obligations imposed by courts or agencies. Most importantly, community-based alternatives along the border and throughout the United States offer a framework for migration processing that keeps families together and makes all our communities safer.

There are many examples of successful community-based programs. For instance, nonprofit organizations in California provide a range of support services to immigrants released from detention, including support with transportation and housing; financial assistance; and in-kind donations such as food, clothing, and phones. These organizations also offer case management to provide support accessing legal, social, medical, and mental health services. Studies show that when human needs and dignity are addressed holistically, case management programs are remarkably consistent in supporting high compliance rates and successful outcomes.

Many communities have already developed smart models for a better and more humane way to support immigrants during case processing. The billions of tax dollars that are currently funding the immigrant detention system can be better invested in communities willing and able to provide an alternative approach.

Years of ICE corruption and impunity have resulted in a system that delivers death and harm to countless immigrants. For those who endure the pain of ICE’s immigrant detention system, the scars are lifelong. This system cannot be fixed, it must be dismantled.

Getting caught in the immigrant detention dragnet means exposure to immeasurable harm and potentially death. The number of people who have died in ICE custody in 2020 is more than double the prior year, even as the number of those jailed has decreased because of Trump-era policies that largely seal off the southern border to asylum seekers. Sexual assault, violent abuse, medical neglect, and unsanitary conditions are commonplace in ICE jails. An opaque web of intentionally corrupted contracts and inspections breed impunity for ICE and its contractors. Independent medical experts have repeatedly found that approximately half of all deaths in ICE custody are attributable to medical negligence. Yet in the very same facilities where multiple deaths have occurred, egregious lapses in medical care and unconscionable delays in treatment persist.

The Trump administration has chosen to implement blanket detention policies that continue to jail immigrants with particular vulnerabilities such as pregnant women and the elderly. ICE has adopted a policy of automatic and prolonged detention of asylum seekers. Additionally, the Trump administration has doubled down on the practice of jailing immigrant families in prison-like facilities referred to euphemistically as “family residential centers.” This practice has been condemned by the American Academy of Pediatrics, which warns that “even short periods of detention can cause psychological trauma and long-term mental health risks for children.”

The COVID-19 pandemic has brought into sharp relief ICE’s callous disregard for the lives of those it detains and the public health of surrounding communities. ICE has refused to provide immigrants in custody with the basic equipment they need to protect themselves from the virus, such as masks and hand sanitizer. Throughout the pandemic, ICE has recklessly and unnecessarily transferred people between facilities, creating new outbreaks inside jails and in surrounding communities. In the town of Natchez, Mississippi, an outbreak in the local immigrant detention center caused a 200% increase in the town’s COVID-19 case load in one week. Detained immigrants who protest ICE’s cruel response are met with pepper spray.

5. The exponential growth of the immigrant detention system is largely driven by profit, not sound policy.

If ICE detention is not the result of smart and effective policy making, then what accounts for the quick growth and massive expansion of the system? Corporate profits. The U.S. immigrant detention system operates under a patchwork of contracts. More than 90% of immigrants detained by ICE are held in county or local jails contracting with ICE, or in large prison complexes owned and/or operated by private prison companies.

Private prison companies have been central and causal to the growth of the immigrant detention system. In fact, CoreCivic and GEO Group, the two largest private prison companies, depend on federal contracts for 48% of their revenue. ICE contracts alone account for nearly one-third of both companies’ profits. CoreCivic and GEO Group have spoken openly with their shareholders about the importance of their government contracts to their bottom line, warning that policies that could reduce the government’s reliance on detention threaten their business model. Smaller companies, such as Immigration Centers of America, also rake in millions every month to detain people while employing lobbyists to pursue new and expanded ICE contracts.

Private profit should never drive public policy making, particularly when that profit motive is proven to result in cutting corners that put lives at risk.

This policy brief was authored by Heidi Altman (email), NIJC director of policy, and Marta Ascherio, PhD candidate, University of Texas at Austin.