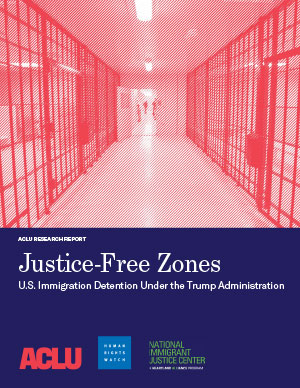 (April 2020) The Trump administration has grown the immigration detention system in the United States to an unprecedented size, at times holding more than 56,000 people per day. Since 2017, Immigration and Customs Enforcement (ICE) has anchored this growth in places where immigrants are most likely to be isolated from legal counsel, remain in detention without real opportunity for release, and are more likely to lose their cases. These new detention centers also exhibit patterns of mistreatment and abuse, including medical and mental health care neglect, that have been present since the inception of ICE’s detention system and grown worse as the system has expanded.

Justice-Free Zones: U.S. Immigration Detention Under the Trump Administration, a joint report by the National Immigrant Justice Center, American Civil Liberties Union and Human Rights Watch, is a comprehensive examination of changes to the immigration detention system under the Trump administration based on data from visits to five detention centers in Louisiana, Mississippi, and Arizona; interviews with over 150 detained people; public government documents; and documents received through Freedom of Information Act requests.