Providing low-income Chicagoans access to free immigration legal services has been critical as the Trump administration has dismantled immigration protections in the United States and seeks to deport as many people as possible without due process. Even though immigrants who have lawyers are nearly five times more likely to win their cases than those without lawyers, the U.S. government does not offer appointed counsel to immigrants facing deportation. Since its inception in January 2017, the City of Chicago’s Legal Protection Fund has provided counsel  and quality legal information to more than 40,000 Chicagoans.

In the first nine months of 2018, through the Fund, the National Immigrant Justice Center (NIJC) conducted more than 1,250 legal intakes. NIJC provided representation in more than 1,500 cases, including 700 new cases opened in 2018. NIJC, The Resurrection Project (TRP), and eight Community Navigator organizations presented more than 460 Know Your Rights sessions to more than 22,500 people.

Top 20 Neighborhoods Served by NIJC through the Legal Protection Fund in 2018: 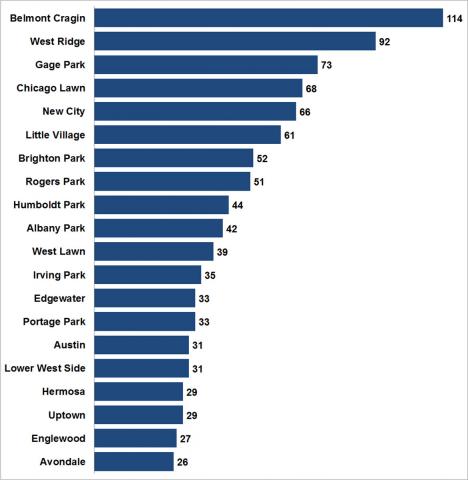 Chicagoans from more than 100 countries received services through the Fund:

Publicly funded legal programs help immigrants who otherwise could not afford lawyers to understand their rights and navigate an adversarial immigration system. This report shares some of the Fund’s stories and successes from a turbulent year.

U.S. Citizenship and Immigration Services is subjecting applications for legal status to increasing scrutiny and denying petitions for trivial reasons. Legal counsel provided through the Fund helps families avoid mistakes in their paperwork which may cost them access to immigration protection, and provides representation to challenge arbitrary decisionmaking by the federal government.

West Humboldt Park: Alexander*, an immigrant from South Africa, came to NIJC to apply for permanent residence after marrying his longtime girlfriend. He he knew how complicated the application was and feared filing the paperwork without legal help, but could not afford the fees charged by private attorneys. With NIJC’s help, Alexander became a permanent resident. His legal status secured, he was able to visit his mother abroad for the first time in 10 years.

Portage Park: Marcos*, his mother, and his five sisters lived in fear for seven years after moving from Mexico. They were victims of domestic abuse and, because they were undocumented, were financially dependent on their abuser. Then Marcos’ mother learned about NIJC and the legal services available to the family through the Fund. “It was life-changing. My mom was struggling the whole time. She was trying to raise six kids on her own while trying to go through this whole [immigration] process. She was working two jobs and could barely get by. She didn’t know how she could pay for legal services.” The family secured U visa protection, and then permanent residence. Marcos went on to participate in Chicago’s One Summer program, an opportunity which opened the door for his current full-time job.

As the Trump administration eliminated legal protections for thousands of immigrants, the Fund helped Chicagoans navigate the shifting landscape. When the administration set termination dates for Temporary Protected Status (TPS), which has allowed people to rebuild their lives in the United States following humanitarian crises in El Salvador, Nicaragua, Honduras, Haiti, Sudan, and Nepal, NIJC helped families prepare for the loss of their protection. In some cases, NIJC identified other opportunities for permanent status. Though federal court orders have allowed Deferred Action for Childhood Arrivals (DACA) recipients to continue to renew their protection, that program’s future is uncertain. Chicagoans turn to NIJC and TRP for help understanding the implications of the court rulings and administration’s rhetoric.

West Town: Manny* was four years old when his family moved to Chicago from Mexico. He is now an architecture student at the Illinois Institute of Technology who obtained DACA protection with NIJC’s assistance under the Fund. But Manny is building a future on an unstable foundation. He says: “[My brother] said, ‘what’s going to happen to Manny?’ ... In high school you should be worried about prom and playing football, and he’s worried about whether or not I’m going to be here five years from now.”

Protecting Chicagoans from ICE in our neighborhoods

U.S. Immigration and Customs Enforcement (ICE) arrested nearly 2,000 people in Cook County in fiscal year 2017, and the agency has ramped up racial profiling and arrests in Chicago neighborhoods even further in 2018. Chicago’s immigrant families rely heavily on being able to find legal services in their own neighborhoods. NIJC, TRP, and eight Community Navigator organizations together provided more than 22,500 legal information sessions in 2018 at community-based organizations, schools, and places of worship throughout the city. Additionally, NIJC conducted nearly 400 intakes at the Southwest Organizing Project and at Heartland Human Care Services in Belmont-Cragin.

Gage Park: Roberto and Ana, originally from El Salvador, were married for three years before they could afford to petition for Roberto’s green card. But when ICE began making arrests in their neighborhood they knew they needed to find a way to secure his status. They were relieved to find out they qualified for free legal services from NIJC under the Fund. “We earn so little that at the end of the day you only have enough to pay for your rent and your bills. We couldn’t save, even though we wanted to, ” Ana says. With Roberto’s status now secure, the couple is planning for their future. “We want to save money for the citizenship fees and after that, we have a big dream to buy a house.”

South Chicago: Eze* is the father of two U.S. citizens and was a Chicago restaurant owner until a brain tumor took his eyesight. In 2011, he missed an immigration court hearing because he was in the hospital for brain surgery. In his absence, the judge ordered Eze to be deported to his native Nigeria. When Eze could no longer afford to pay a private immigration attorney, he came to NIJC and, through the Fund, now has free representation as he seeks to cancel the deportation order and obtain permanent residence with the support of his U.S. citizen wife.

Portage Park: Gloria*, from Mexico, first learned about NIJC and its services through a Fund-supported Know Your Rights session she attended with her U.S. citizen daughters. At NIJC, she learned that her daughter,  an active service member in the U.S. military, could petition for a form of legal relief known as Parole in Place for U.S. Military Families. Through this program, Gloria was able to stay in the country and not be separated from her family. She continues to support her daughters as they pursue their dreams and build their futures.