ICE Lies, Manipulates, and Takes Money from Other Agencies to Lock up and Deport More Immigrants

The U.S. Department of Homeland Security (DHS) has spent more than $4 billion this fiscal year to lock up and deport immigrants.

$10 million of that, we now know, came from the Federal Emergency Management Administration (FEMA) as part of a transfer request congressional appropriators signed off on this summer after U.S. Immigration and Customs Enforcement (ICE) blew through its budget. This money helped fund ICE’s efforts to lock up asylum seekers at the border and increase raids in our communities, tearing thousands of immigrant parents from their children. In total, Congress approved a transfer of more than $200 million away from other programs to cover DHS’s overspending on immigration prisons. In addition to FEMA, that transfer took money from the Transportation Security Administration and the Coast Guard. NIJC and the Detention Watch Network obtained the documents detailing these transfers. 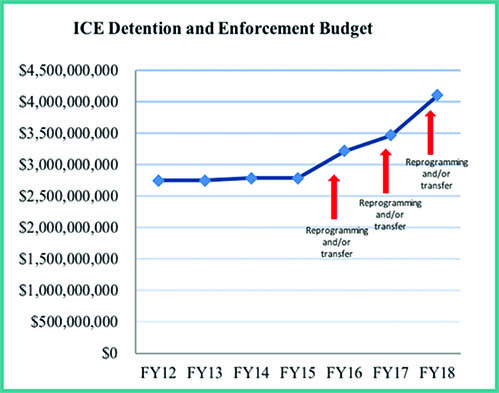 This month, the Government Accountability Office released a report criticizing FEMA’s inadequate response to Hurricane Maria, which killed nearly 3,000 people in Puerto Rico. As Senator Merkley shined a light on ICE’s funding transfer for all Americans to see, another massive hurricane barrels toward the East Coast.

Funding that could have saved lives is now going to expand an ICE detention and enforcement system whose human toll, mismanagement, and abuses are at this point well documented—including medical negligence leading to deaths in immigration jails, rampant sexual assault in immigration jails, and the use of racial profiling and other illegal tactics to arrest immigrants in our communities and workplaces. ICE routinely opens new immigration jails before it has the funding to do so, and blatantly lies about where and how many people it is locking up. DHS’s own watchdog found this year that the agency fails to properly inspect immigration jails to ensure they meet the basic standards of care.

How has DHS convinced Congress to continue to expand its massive budget amid these abuses?

One answer is that ICE lies.

Despite its chronic fiscal mismanagement, ICE has achieved a $1 billion dollar budget increase in the past two years—solely for detention and deportation operations—by persistently manipulating Congress’s appropriations process.

Here’s the pattern:
1) ICE overspends
2) ICE requests additional funding from Congress to compensate for its overspending
3) After Congress approves the additional funding, ICE uses its newly inflated budget as the starting point for budget negotiations for the next year.

Since obtaining an infusion of money from FEMA and other agencies this summer, ICE has gone back to the well yet again. As Congress began this month to negotiate the federal government’s fiscal year 2019 budget, ICE used a loophole known as an “anomaly” to request an additional $200 million in the continuing resolution, a bill that is supposed to provide level funding from the previous fiscal year. Having this additional funding locked in as part of the continuing resolution would allow the agency to begin negotiations on its final FY 2019 budget with its bloated FY 2018 budget (including the infusion of cash from FEMA) as the starting point.

Last week, 175 immigrant and civil rights organizations sent a letter to congressional appropriators telling them enough is enough. Congress has the authority to engage in meaningful oversight of this abusive agency, if only it chooses to do so. Congress must cut ICE’s funds and explicitly prevent DHS from spending more than the already agreed upon amount for fiscal year 2019.

You can help make sure Congress doesn’t fall for ICE’s trickery yet again, and this time, holds ICE accountable for its abuses and gross mismanagement.

TAKE ACTION: Tell your members of Congress to stop funding efforts to rip families apart, and lock up and deport our immigrant neighbors! 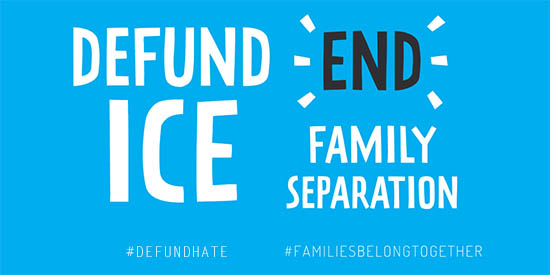