Exploiting the pandemic to expel asylum seekers: An FAQ on why Title 42 expulsions must end

On April 1, 2022, the Centers for Disease Control and Protection (CDC) announced that it would end the use of Title 42 starting May 23, 2022. The Department of Homeland Security (DHS) released a fact sheet the day before, clarifying that the agency was more than prepared for any projected increase in migration. The decision to end Title 42 was the right one and the administration must resist the inhumane efforts to politicize public health and refugee protections. In particular, this FAQ addresses the following questions:

“Title 42” refers to Section 265 of the Public Health Service Act, a statute last invoked in 1929 to bar the entrance of ships during a meningitis outbreak. In 2020, the Trump administration retooled this public health statute to permit the mass expulsion of virtually all non-citizen/residents arriving at U.S. borders, expelling 462,792 people seeking protection in the United States. When a person is expelled, they are turned away at the United States border without any screening for asylum eligibility, resulting in refugees regularly being returned to harm. Although these expulsions stand in clear violation of domestic and international asylum obligations, the Biden administration increased Title 42 expulsions, turning away over 1,255,014 people between February 2021 and February 2022.

The humanitarian impact of Title 42 is breathtaking. Title 42 expulsions have resulted in nearly 10,000 documented cases of kidnappings, rape, torture, or other acts of violence for the people expelled. DHS’ Customs and Border Protection (CBP) has expelled tens of thousands per month, including infants, in a policy that directly endangers children and their families. Due to these summary expulsions, thousands of children, including children as young as 10 years old, have arrived unaccompanied in the United States as families are separated trying to find safety.

2. Is the U.S. ready to welcome and process asylum seekers with dignity?

Yes. The United States has the obligation, capacity and resources to reopen ports of entry to people seeking protection. Border communities and service providers have rejected any further delay in ending Title 42 and stand ready to welcome asylum seekers. CBP has clarified that the agency is fully equipped to secure and manage our borders while building a fair and orderly immigration system, pointing to the billions in funds already appropriated by Congress to improve border processing. Existing border reception centers work tirelessly to provide arriving families voluntary respite and social support services, COVID-19 testing as needed, orientation to the asylum system, and assistance with securing safe transportation to their final destinations.

In fact, Title 42 and other asylum-restricting policies at the border are exacerbating rather than helping the humanitarian and logistical challenges at the southwest border. In failing to comply with asylum law at official U.S. ports of entry, agencies have pushed asylum seekers to undertake increasingly dangerous border crossings outside of authorized ports. The rapid expulsion of migrants without any legal process has resulted in a dramatic increase in repeat border crossings and as a result inflated CBP apprehension statistics. Any figures presented by Border Patrol on the predicted increase in migration following Title 42 should be scrutinized in this context. Moreover, CBP has made clear they have the resources and personnel needed to manage any increase.

3. Was there ever a public health justification for Title 42?

No. Not in 2020 — even less so today. The entire concept of an “expulsion” under Title 42 was invented by the Trump administration in March 2020, when former Vice President Mike Pence and Trump top aide Stephen Miller strong-armed the CDC to use public health justifications to shut down the border. Experts found no public health rationale for this ban on asylum seekers, 91.9 percent of whom could have sheltered in place with loved ones like the rest of the country’s residents. With few exceptions and despite litigation, the CDC renewed Title 42 for the two years that followed. Epidemiologists, former CDC officials, and public health experts have continued to denounce the “junk science” behind Title 42 expulsions. Expelling migrants and asylum seekers was simply not necessary to contain the virus in the United States.

If it made any sense before, Title 42 certainly does not make sense now as the vast majority of states have loosened mask mandates and vaccines, testing, and treatment are widely available. In March 2022, DHS further demonstrated the unjustifiable character of Title 42 when it explained that an operation targeting Colombians was expelling people only after they tested negative for COVID-19 and showed no symptoms in a medical screening. The Trump administration weaponized public health to serve its anti-asylum agenda. Normalizing such extreme measures puts the United States’ moral and legal standing at grave risk. It is past time for the CDC to end Title 42 expulsions in the name of public health. 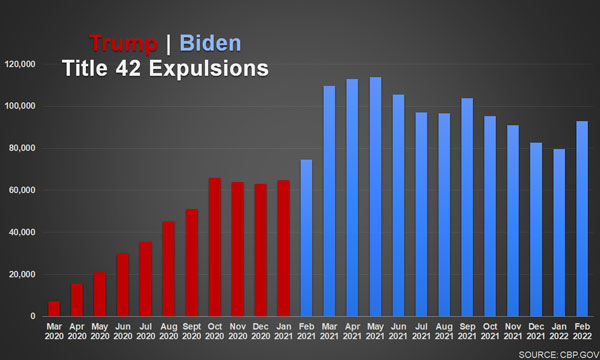 In a nutshell, racism and xenophobia. White supremacy historically conflates migration and contagion, as does Title 42. In the 19th century, lawmakers groomed the ideology that immigrants may carry “loathsome and contagious disease.” This view — predicated on racist, classist, and ableist stereotypes — laid the groundwork for selective medical screenings, deportations, and eugenics in the 20th century. Immigration became synonymous with contagion and a threat to domestic welfare.

In the midst of the HIV/AIDS epidemic and growing public pressure, the CDC designated Haitians as a high-risk group in 1983—as if the virus cared about the nationality of whom it afflicted. When Congress issued an immigration ban on individuals living with HIV/AIDS in 1987, this ban only selectively applied against Haitians. Racial bias informed this public health policy at its inception and in its implementation.

Sadly, the same is true with Title 42. Before pressuring the CDC at the start of the pandemic, Stephen Miller, Trump’s white supremacist advisor, had spent years searching for a way to ban migration on the basis of public health. Two years and nearly 2 million expulsions later, the Trump and Biden administrations have returned tens of thousands of Haitians, as well as countless Black, Brown, and Indigenous people to danger. Further exposing the disparate impact of this policy, DHS Secretary Mayorkas recently called on CBP to exempt Ukrainians from Title 42 expulsions, grace that has not been granted to refugees fleeing non-European countries.

2021 in @POTUS world. These are images of @CBP agents with a Haitian asylum seeker. This is how Black migrants are being treated. pic.twitter.com/R5LOXb9ixZ

5. Why are some calling for the continuation of Title 42?

Ironically, for reasons wholly unrelated to public health. A minority of lawmakers have called for the Biden administration to continue Title 42 expulsions as a border management tool. These statements make clear once more that public health never informed the decision to implement Title 42. They also ignore the United States’ decades of experience processing asylum seekers prior to the pandemic and border communities and nonprofits’ long history of welcoming migrants seeking refuge.

Overwhelmingly, the reason to end Title 42 is the irreversible harm to the right to seek asylum and the United States’ longstanding commitment to refugee protection. Before the Biden administration’s announcement, more than 100 members of Congress, public health experts, the Congressional Hispanic Caucus, and top advisors from the administration, made clear that nothing short of a full repeal of this expulsion policy will fulfill humanitarian mandates under U.S. and international law. Multiple federal judges and a unanimous appeals panel have ruled that Title 42 violates individuals’ fundamental rights to asylum and humanitarian protection. The United Nations’ top refugee agency has issued a legal opinion that public health measures do not cancel out the international obligation to process asylum claims.

Rather than continuing programs that send refugees back to harm while creating chaos at the border, it is past time for the United States government to resume an organized, humane asylum program that lives up to our country’s long-held ideals and treaty obligations.