One year ago, the Trump administration exploited the public health crisis to conduct mass expulsions, shutting asylum seekers out. While President Biden has mandated a review of this procedure, his administration continues to expel asylum seekers by the hundreds every day—including Haitian families and babies—back to the dangerous conditions they fled. NIJC and 100 organizations have called for these expulsions to end—as have leading public health experts and epidemiologists who found no basis in the government’s specious public health reasoning. Yet, the border still remains indefinitely closed under the Biden administration. NIJC strongly condemns these unlawful expulsions which have already sent countless migrants back to certain harm or death. Following are responses to frequently asked questions about these shameful continued expulsions.

1. What was the Trump administration’s purported legal basis for closing the border?

In March 2020, the Department of Health and Human Services’ (HHS) Centers for Disease Control and Prevention (CDC) issued an order, in coordination with the Department of Homeland Security (DHS), barring entry of all “nonessential” travelers at the Southern and Northern border. The CDC Order suspends the entry of all people arriving at the United States border without valid travel documents; the only exceptions are U.S. citizens, lawful permanent residents, members of the armed forces, and their respective families.

For the first time in U.S. history, the executive branch cited 42 U.S.C. § 265 to justify the border's indefinite closure. Enacted in 1944, this statute preceded the end of World War II, which revealed the global failure to protect the most vulnerable in times of crisis. The statute enables the Surgeon General to impose a partial or complete restriction on the introduction of persons and property into the United States to avert the spread of infectious disease. Over the 60+ years that followed its passage, Congress enacted numerous protections for asylum seekers and children, creating a complex legal framework for the protection of refugees arriving at U.S. borders. Yet, the CDC Order does not even mention these superseding laws and policies.

2. Why is it unlawful to expel asylum seekers?

Nearly 40 years after the enactment of 42 U.S.C. § 265 (the statute used to justify the border closure), Congress enacted the Refugee Act of 1980, enshrining the “historic policy of the United States to respond to the urgent needs of persons subject to persecution in their homelands.” The Refugee Act amended existing law to provide that any noncitizen “who arrives in the United States…may apply for asylum.” The U.S. also signed and ratified the 1967 United Nations (U.N.) Protocol Relating to the Status of Refugees, which incorporates the 1951 U.N. Convention Relating to the Status of Refugees. This means that international principles of non-refoulement—the prohibition against returning individuals to a country where they will be harmed based on an intrinsic characteristic included in the U.N. Refugee Convention–are the law of the land.

Under the U.S. asylum system, Customs and Border Protection (CBP) is thus prohibited from returning individuals to a country where they may face life-threatening harm on the basis of a protected ground. While the CDC Order does not explicitly permit expulsions, the CDC created a legal vacuum by failing to address the rights of asylum seekers and unaccompanied children at our borders. An internal memorandum uncovered by an investigative journalist revealed that CBP had interpreted the CDC Order to mean that Title 42 overrides existing U.S. law mandating processing procedures for asylum seekers and children. Since then, CBP officers expelled nearly half a million people since March 2020, including countless asylum seekers and at least 13,000 unaccompanied children, without any screening for fear of return or trafficking.

3. Now that President Biden has taken office, have expulsions ended?

Far from it – in fact, expulsions have increased (see chart below). On February 2, President Biden mandated a review of Title 42 expulsions. However, rather than halting expulsions during this review, the Biden administration has stated that a “vast majority of migrants” will be turned away using Title 42. This is particularly troubling given the Biden administration’s day-one moratorium on deportations (subsequently enjoined), with all DHS enforcement policies under a 100-day review.

4. Who is impacted by these Title 42 expulsions? 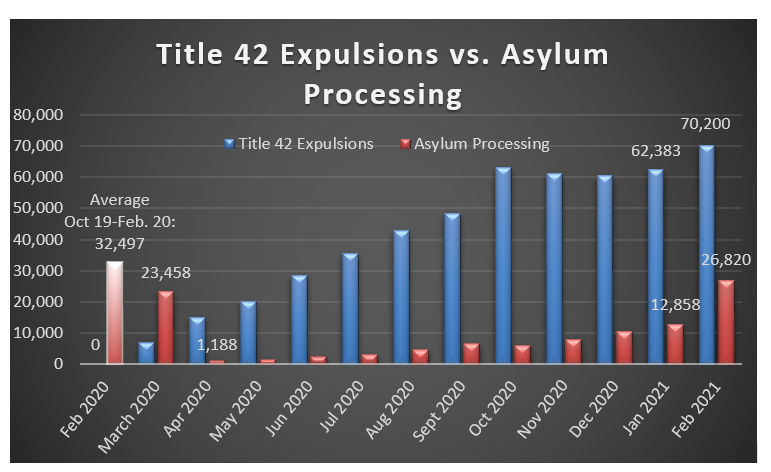 From October 2019 to February 2020, in the months prior to the border closure due to the pandemic, there were on average approximately 32,496 asylum seekers processed per month at the border; by April 2020, that number plummeted to 1,188—a near 30 fold decrease. Meanwhile, expulsions have steadily increased—breaking a record in February 2021 with over 70,200 expulsions.  As of January 2021, 62,383 people were expelled under Title 42 in the Southwest Border compared to 12,858 processed for asylum. The continued use of Title 42 expulsions all but ensures that a great number of asylum seekers return to harm, even as the CBP begins processing more asylum seekers.

The human toll of these expulsions is hard to overstate, and primarily impacts Black and Brown asylum seekers. Expelled individuals include Haitian asylum seekers and Nicaraguan torture survivors who sought the protection of the U.S. government, only to now live in fear for their lives following their unlawful expulsions from the U.S. Children of all ages continue to be expelled if they are accompanied by a parent or other adult while Title 42 is reviewed, including a two-month old Haitian baby.

5. This pandemic has been so hard to control. Why is it problematic to use public health to shut the border temporarily?

In addition to being unlawful (see 2. above), the border closure also perpetuates racist stereotypes about migrants and asylum seekers. The U.S. has a dark history of weaponizing public health to advance anti-immigrant views. In the 19th century, lawmakers groomed the ideology that immigrants may carry “loathsome and contagious disease.” This view — predicated on racist, classist, and ableist stereotypes — laid the groundwork for selective medical screenings, deportations, and eugenics in the 20th century. Immigration became synonymous with contagion and a threat to domestic welfare.

In the 1980s, the U.S. imposed an immigration ban on individuals living with HIV/AIDS. Like today, the government ignored the elephant in the room: that the U.S. had the largest outbreak anywhere in the world. Instead, the U.S. began jailing Haitian asylum seekers in an HIV prison camp in Guantánamo Bay, where some refugees were told that “they could be at Guantánamo for 10 to 20 years or until a cure for AIDS is found.”

Today, the U.S. is far from shedding this racist ideology. This purported “temporary” solution is now indefinite, fast approaching its one-year anniversary. The past administration viewed the pandemic as an opportune vehicle to implement its longstanding scheme: exploiting public health as a pretext to close the border. Given this historical backdrop and the disparate impact on Black and Brown asylum seekers, the Biden administration’s continued use of Title 42 to wall off asylum seekers flies in the face of racial equity.

6. What should the Biden administration do?