Last Friday I received a series of desperate voicemails from a client’s husband. We had been working on his wife Maria’s* case for almost a year, and overnight he had left me urgent messages requesting that I immediately call him back. When I called him, he told me that Maria, who had been deported almost two years earlier, had tried to reenter the country to reunite with her family and was detained at the border. His angst at not knowing what would happen to her came through the phone. He told me Maria’s last known detention facility, and I managed to schedule a conference call with her for a couple of hours later. 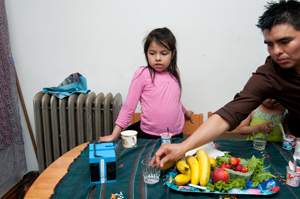 When I spoke to Maria, she told me that she returned to the U.S. because she thought it was her only option. Her children and husband regularly crossed the U.S.–Mexico border to see her, and Maria described the drug dealers and crime that were prominent in the area. She didn’t want her kids crossing anymore, but as young children, she knew they needed her.

Maria’s husband and their children are U.S. citizens. At one time, he owned a small business and their children excelled in school and extracurricular activities, winning awards and regularly being highlighted in the local newspaper. They were also a deeply religious family with strong moral values. They epitomized the ideal American family, but the horrific possibility of going through life without their mother has taken its toll. The family moved from their home to be closer to Maria, and Maria’s husband liquidated his business to afford the move. The kids left their accelerated academic programs because they wanted to be near their mom. Now, Maria’s husband has taken a job where he does not earn as much as he did in his small business. The couple’s oldest child suffers from depression, and the kids are no longer enthusiastic about school. Most significantly, the family struggles to afford the expense of a border life. Last Friday, when I pressed the father for more details, he responded with, “We’re starving.” It is painful to see such an inspiring family unravel so quickly. The saddest part is that they are in this situation because Maria’s original deportation occurred after her right to fight her case was violated. Unfortunately, they are just one of many in similar situations.

One of the hardest parts of representing detained clients is working with their families. My colleagues and I willingly accommodate the needs of detained individuals’ family members because they are suffering the unimaginable ordeal of losing a loved one. They also are important assets to our clients’ cases. There are few things that can raise clients’ spirits more than getting updates or assurances on the well-being of their families. Providing detained clients with these updates makes them emotionally stronger and more prepared to fight their cases. Often, however, the family members suffer as much, if not more, than their detained relatives.

Naturally, families worry about the outcome of their loved ones’ cases. Infrequent communication with their relatives and unfamiliarity with a process they are not personally involved in puts them on edge. As a result, the families of my clients will often cry and yell out of exasperation during our phone conversations. For a client who has numerous relatives interested in his case, the same conversation, crying, and yelling, can occur multiple times a week. This was the case with Alejandro, whose closest family is almost 500 miles away from where he is detained in Texas, and whose spouse and children are in Mexico. He has a large support system, so while I gathered information for his case, I spoke with his wife, brother, and sister-in-law multiple times a week and encountered varying levels of emotion. Alejandro’s case is still pending, and after seven months, he is still detained. His brother calls in weekly to check in on any progress with his case.

Another client, Adriana, an older woman with diabetes, has an adult daughter named Rosa who lived almost 900 miles away from the detention center. The two spoke almost daily. Rosa was emotionally crushed when her mom was detained and facing imminent deportation to El Salvador. Rosa kept money in Adriana’s commissary account so that her mother could call her to keep her updated. But U.S. Immigration and Customs Enforcement (ICE) kept moving Adriana from one Midwest detention facility to another, to Chicago for processing, and back to a different facility. Rosa was often unable to talk to her mother for days. About a third of the times Rosa and I spoke, she cried, not knowing where her mother was or how she was doing health-wise, and wondering what was going to happen next. To Rosa’s relief, after about three months, ICE released Adriana from detention. Her case is pending, and Rosa worries everyday about what will happen to her mom.

In discussions surrounding immigration reform, so often the conversation focuses solely on deporting individuals for allegedly committing certain “wrongs.” It would be convenient if it were that simple. Often forgotten are the difficulties suffered by the family members who are left behind, and the broken lives those people will be forced to live in the United States. I challenge everyone to imagine themselves in the positions of Adriana’s, Alejandro’s, and Maria’s family members before deciding that they don’t matter.

*All names have been changed to protect individuals’ privacy.