Diego, dressed in his detention uniform of crocs and sweatpants, sits across from me as we go through questions about his journey to the United States and his life back home in Honduras. As we talk he is nervous, and he confesses that he never learned how to read or write because he never went to school. At age eight, Diego started working odd jobs in construction. He took on this responsibility for his family because his mother was sick and unable to work. His father left for the United States years ago but sent little financial support to his family. At only 14 years old, Diego journeyed to the United States to get a better job than he had in Honduras. He tells me he never wants his younger siblings to have to live with the poverty he was forced to endure. Diego is one of approximately 300 children who are detained in the Chicago area. Their stories challenge most popular notions about who undocumented immigrants are. 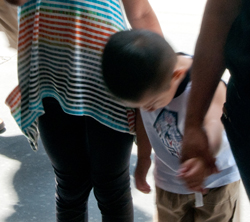 In the past six months, the number of young people who have attempted to cross the border alone and without documentation has dramatically increased. The number of children detained in the Chicago area doubled last spring. Two new detention centers, including one that houses approximately 180 minors, opened to house the influx. The National Immigrant Justice Center’s Children’s Protection Project provides legal services for these unaccompanied immigrants, who are between the ages of five and 17. Our team provides “Know Your Rights” presentations, assesses the youth for legal relief, and assists them with immigration applications. The attorneys on the project also represent some children in court.

While there is no definite answer as to why more children are crossing the border, many of their motivations for coming to the United States echo those of adults. The vast majority come from Central America, mostly from Honduras, El Salvador, and Guatemala. They tell us they came because they felt the responsibility to work and provide for their families. Others came to reunite with family members whom they have not known for most of their lives. There also are many who came seeking refuge from horrors including rampant violence by gangs and drug cartels, severe abuse by family members, and economic instability that left them without viable means to support themselves.

To get here, these young people made the same treacherous journey as thousands of adults before them. Most were detained by the Department of Homeland Security (DHS) at the border in Texas or Arizona and then flown to Chicago. Because they are minors, they are detained in the custody of U.S. Department of Health and Human Services’ Office of Refugee Resettlement (ORR) until they can be released to sponsors in the United States. Even while they are detained, many children tell us they feel the burden to work and send money to their families. We explain to them that the government must give permission for them to work legally in the United States. Even after they leave the detention centers, they might still wait for over a year to go to immigration court, where a judge will make the final decision in their case. Many of them know that their permanent settlement in the United States is far from secured.

These youth’s age and circumstances are compelling reasons to allow them to stay in the United States. Unfortunately, most of them will not qualify for legal relief under our current laws. Many children are forced to choose between voluntarily returning to their home countries or staying in the United States and living with the risks of being undocumented. The overwhelming majority of the children we meet have family members living here.  Many of them have trouble understanding why they cannot stay permanently in the United States.

Before this summer, the ORR centers mostly housed teenagers. During the past three months, there have been overwhelming numbers of children under age 12. While working with younger children, it becomes even more challenging to explain the legal processes as well as what will happen in their cases when they leave detention.

In Diego’s case, through our initial screening we determine he was eligible to apply for Special Immigrant Juvenile Status (SIJS), a legal remedy for children who have been abused, neglected, or abandoned by one or both parents. Diego will leave the center in a few weeks to reunify with a family member in the United States. Because he will no longer reside in NIJC’s service area, Diego will have to find another attorney to help him with his immigration case. It is imperative for Diego to understand that even after he leaves the detention center, there will still be much work for him to do, with the help of a lawyer, to apply for SIJS.

Often what comes up when talking about children like Diego are the tragic circumstances from which they come and the injustices of the system in which they are ensnarled. While these concerns are valid, I believe these youth are often not commended for their sheer courage and chutzpah.  When asked why they came to the United States, several young people such as Diego have explained to me, "Estamos luchando. [We are fighting.]" They made the journey fighting poverty, violence, and mistreatment in the hope of making something better in their lives. Despite the challenges and the anxiety that they will not be able to stay in the United States, they are able to maintain their profound courage and the hope that life will give back to them one day.

Erin Carpenter is a paralegal for NIJC's Children's Protection Project.