An asylum seeker's long struggle through the U.S. immigration system

After more than six years fighting his case in immigration court, Rashed Binrashed, an asylum seeker and NIJC client, finally won his case. Last month we wrote a blog post about his case and his advocacy for immigration detention and court reform. In today’s post Colby Kingsbury, who provided pro bono representation for Rashed, offers her perspective on Rashed’s case and what it took as a lawyer to see her client through several challenging years. 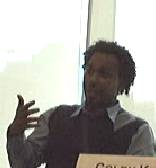 Rashed’s recent success is a true testament to a client who was willing to hang in there and see his case through to the end despite so many hurdles and years. I hope, and I am sure that Rashed agrees, that Rashed’s case can be used as a shining example to other immigrants consumed by the U.S. legal system to never give up if there is still an opportunity to win.

Maintaining Rashed’s confidence through such a long case was a challenge. One of the things we arranged to keep up his morale was weekly phone calls with his family. I would call Rashed, patch in his family, and I would set the phone down so they could have a somewhat private conversation for even a half hour.

One of the biggest problems with our first hearing was that the immigration judge found Rashed’s father’s testimony, which was given in his native language and poorly translated by a court interpreter, to be incredible and even “incoherent.” We had a third party translate the testimony and found that the original translation from the court-appointed interpreter was very poor and frankly, inaccurate. The new translation was accepted by the Seventh Circuit Court of Appeals and was given the credit it deserved both by the Seventh Circuit and rather explicitly by the Board of Immigration Appeals (BIA).

We also had to be creative in our advocacy. We filed a habeas corpus action to expedite Rashed’s release, moved both the immigration court and the BIA to issue a ruling, petitioned U.S. Immigration and Customs Enforcement to release Rashed after the Seventh Circuit overturned the immigration judge’s ruling, attempted to get Rashed a visa based on exceptional compassionate grounds in the United Kingdom because his family has received asylum there, and embarked on the appeal process when the visa was denied. We are still working with the British Embassy to allow Rashed to move to the United Kingdom since he may have better status there than what withholding of removal status will offer him here in the United States. We were even preparing to file a mandamus urging the BIA to make a final decision right before this terrific order came in.

Colby Kingsbury is a partner at Baker Daniels LLP. She began representing Rashed as a partner at Kirkland & Ellis LLP, which also continued to provide support until the conclusion of his case.

Add the Immigrant Justice Blog to your RSS Feed Reader