The Trump administration regularly manipulates data to support its anti-immigrant agenda. Two weeks after President Trump shut down the federal government because Congress refused to approve funding to build a wall on the southern border, Homeland Security Secretary Kirstjen Nielsen presented a slideshow to the president’s Cabinet that was widely publicized for relying on inaccurate and heavily inflated numbers to create a sense of crisis in the border region. But it has long been a tried and true strategy for this administration’s agencies and government officials to misrepresent facts and figures and implement policy changes intentionally developed to gin up data points that prove a pre-established nativist narrative.

This policy brief describes how the administration has corrupted immigration data to fuel its anti-immigrant policy agenda. Particularly alarming examples include its manipulation of information and data to (I) undermine access to asylum; (II) exacerbate the due process crisis in the immigration courts; and (III) escalate the criminalization of migrants.

I. Crippling Asylum Access, then Touting Low Approval Rates as Evidence of Fraud

The Trump administration made it nearly impossible for many people to get asylum, and now cites low grant rates to claim there are no legitimate asylum seekers. 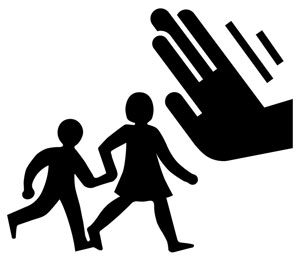 The administration’s campaign to close the border to asylum seekers began almost on day one. President Trump’s February 2017 Executive Order on border security called for higher standards for screening asylum seekers’ fear of return. At the border, Customs and Border Protection (CBP) has intentionally reduced the processing of asylum seekers at ports of entry and doubled down on a so-called “metering” system that numerically limits the number of asylum seekers processed. Within the immigration court system, Department of Justice (DOJ) leadership has upended longstanding case law to make it even more difficult for survivors of gang-related and domestic violence to establish eligibility for asylum.[1] Unsurprisingly, these policies have shut off asylum protections for many applicants in need: under the Trump administration, denial rates for asylum applicants rose from 54.6 percent in fiscal year (FY) 2016 to 60.2 percent in FY 2017 and to 65 percent in FY 2018.

The president and his Cabinet officials, after imposing such arbitrary obstacles to asylum, now claim that the resulting low asylum grant rates mean that most asylum seekers are here to “game the system,” as Acting Attorney General Matthew Whitaker recently stated after asserting that “only 20 percent of aliens have been granted asylum after a hearing before an immigration judge.”[2] In his presidential proclamation attempting to ban certain migrants from asylum eligibility, President Trump stated that “only a fraction” of claimants at the southern border “ultimately qualify for asylum.”

The fault in the president’s logic is so simple it’s easy to miss: the Trump administration made it nearly impossible for even the most bona fide refugee to obtain asylum, and now claims that applicants’ failures to win protection proves they filed applications for nefarious reasons. The administration is cynically using its own cruel policies to create facts designed to further more cruelty.

The administration downplays the access to counsel crisis in our nation’s immigration courts, especially for children, and lies about the prevalence of non-appearance rates in immigration court. 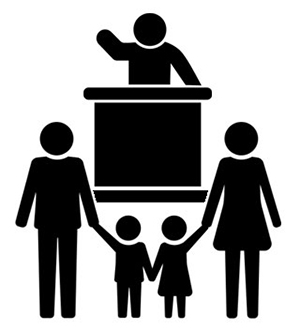 The DOJ Executive Office for Immigration Review’s (EOIR) own data shows that at least 60 percent of immigrant families in deportation proceedings appear for hearings, a statistic that rockets up to 98 percent when families are represented by counsel who can help them understand the court process. Among unaccompanied children, 67.6 percent overall and over 95 percent of minors with legal representation appear for their hearings.

But in one recent hearing before the Senate Permanent Subcommittee on Investigations of the Homeland Security and Governmental Affairs Committee, EOIR Director James McHenry put forward several problematic representations of immigration statistics that subverted this reality. At one point, McHenry cited statistics from a program whose scope is limited to providing children’s parents or sponsors a basic legal orientation to argue that providing full legal representation is ineffective in ensuring children’s appearance in court.[3] During the same hearing, McHenry also blatantly misrepresented court appearance data, testifying without evidence that children in immigration court proceedings appear in court only 53 percent of the time.[4]

The president’s mischaracterization of this data has been even further removed from reality, including unsubstantiated claims that immigrants “never show up [to court], it’s like a level of 3 percent. They never show up for the trial.”

Obfuscation about representation and appearance rates in immigration court is particularly harmful given how powerfully the deck is already stacked against immigrants in deportation proceedings. Although U.S. Immigration and Customs Enforcement (ICE) is represented in each proceeding by its own federal counsel, there is no right to counsel for indigent immigrants who cannot afford private representation. Nationally, only 37 percent of all immigrants and only 14 percent of detained immigrants are represented in their immigration court proceedings. Representation is a particularly critical due process safeguard in immigration court, where people face life-altering consequences and need an expert in the law by their side to ensure they understand how to comply with complex court processes. Immigrants with attorneys are five times more likely to win their cases than those without attorneys. For detained immigrants, it can be nearly impossible to even present a case without counsel; those with attorneys are 11 times more likely to be able to seek a defense to deportation.

The administration employs both the criminal justice and deportation systems to target immigrants, using its discretion to increase already sky-high prosecutions of immigrants and subsequently touting increased convictions to demonize immigrants. 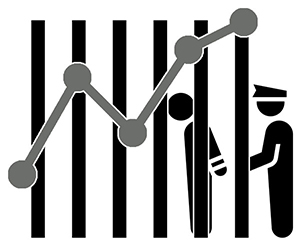 The Trump administration is quite literally creating its own crime statistics by making it impossible for asylum seekers to present lawfully at ports and then choosing to prosecute as many people as possible for crossing the border elsewhere to request protection. In April 2017, the DOJ announced it would prioritize the prosecution of migration-related offenses, a jarring announcement in light of the fact that migration-related prosecutions already constituted more than half of all federal prosecutions when the Trump administration took office. A year later, DOJ established a “zero-tolerance” policy, whereby U.S. Attorneys Offices at the southwest border were instructed to prosecute all migrants entering between ports of entry under 8 U.S.C. § 1325, improper entry.

Zero-tolerance led to a spike of prosecutions along the southwest border, with a 30 percent increase from the month prior to the announcement of the policy. As Acting Attorney General Matthew Whitaker recently noted, in FY 2018, DOJ charged 85 percent more immigrants with unlawful entry than in FY 2017, and increased felony reentry prosecutions by over 38 percent. Fueling the zero-tolerance policy was the administration’s concerted blockading of the southern border through illegal turnbacks and so-called “metering” of asylum seekers at ports of entry, both still ongoing, forcing many asylum seekers desperate to reach the safety of the United States to attempt to enter between ports.

The administration utilizes the statistics resulting from these policies to conflate notions of criminality and immigration status in its policy and rhetoric. ICE routinely touts the high percentage of immigration-related criminal arrests and deportations that involve immigrants who enter outside a port of entry, yet increasingly these statistics reveal the extent to which the administration is cooking the books by driving up the rates of migration-related offenses. Most recently, in ICE's FY 2018 data release, the agency specifically highlighted arrests of immigrants by “Criminality,” arguing that “the largest percentage of aliens arrested by ICE are convicted criminals (66 percent).” Of the categories of underlying criminal conduct, however, immigration-related offenses ranked as third with 51,249 immigrants. Similarly, CBP highlights immigrants convicted of both entry and reentry offenses, with statistics as of August 2018 demonstrating they were the leading type of convictions for so-called “criminal aliens,” representing 41 percent in FY 2017 and 47 percent of all convictions in the first eight months of FY 2018. While the administration frames these statistics to argue that migrants have become a greater threat, the story they really tell is of a federal agency that has become obsessed with punishing people for crossing the border.

The use of official government resources to paint groups of people as undesirable or criminal mirrors strategies employed by authoritarian regimes throughout world history who have sought to consolidate power, effectuate anti-democratic agendas, and provide a pretext for persecution. During World War II, the Nazi regime published a list of supposed crimes committed by the Jewish population. Russia’s current authoritarian regime regularly employs the criminal justice system to prosecute and convict LGBTQ individuals. Scapegoating minorities is one of the time-tested tools for dictators.[5]

Through data manipulation, the Trump administration is deftly employing the various levers of government to implement inherently flawed policy that criminalizes immigrants, subsequently touting that criminalization to vilify them. Collaterally, the administration manipulates or misrepresents data to impugn immigrants and their families as criminals who are undeserving of protection. The endgame is apparent—to build a foundation to enact policies that erode due process, increase incarceration of communities of color, and strip legal protections from immigrants. Congress and other stakeholders must hold this administration accountable and ensure that its anti-immigrant policies are not justified through the use of data or policy inherently designed to undermine basic human and civil rights.

This policy brief was authored by Jose Magaña-Salgado for the National Immigrant Justice Center. NIJC’s Heidi Altman and Tara Tidwell Cullen contributed to the report.

1. Attorney General Sessions' opinion in Matter of A-B- is currently subject to litigation, with a preliminary, nationwide injunction in place as of December of 2018. See also Matter of E-F-H-L-, 27 I&N Dec. 226 (A.G. 2018), undermining the right to an evidentiary hearing for asylum applicants.

2. Asylum denials often have life and death consequences for individuals, with deported asylum seekers facing persecution and even death in their home countries.

3. Exchange begins at 1:36:40 in this video of the HSGAC hearing. In this same hearing, Director McHenry also cited an EOIR-produced statistic that the “representation rate for UACs [unaccompanied immigrant children] in proceedings . . .  whose proceedings have been pending for over a year is already 75 percent.” By focusing on representation for unaccompanied minors with cases pending for a year or more, Director McHenry excluded representation rates for cases completed in less than a year, namely cases where a judge ordered a minor deported in absentia (e.g. without the minor’s presence in the court) precisely because the minor did not have representation. See Denied a Day in Court: The Government's Use of In Absentia Removal Orders Against Families Seeking Asylum 15, Catholic Legal Immigration Network, Inc. and the Asylum Seeker Advocacy Project, 2018. Looking at impartial data regarding representation rates provides a more sobering picture. As of November 2018, only 48 percent of unaccompanied minors had representation, regardless of how long their case had been pending. See Juveniles — Immigration Court Deportation Proceedings, TRAC Immigration, Nov. 2018.