NIJC condemns any delay of the termination of Title 42 expulsions

Earlier this month, the Centers for Disease Control and Prevention (CDC) announced that it would end the use of Title 42 starting May 23, 2022. The Department of Homeland Security (DHS) released a fact sheet clarifying that the agency was more than prepared for any projected increase in migration. Since then, reports have emerged that the White House and a growing number of members of Congress are seeking to delay the end of Title 42.

“Our country has an obligation to uphold values of human rights and to treat people humanely when they come to our borders seeking refuge. There is no defense for the continuation of Title 42 expulsions, which have been overwhelmingly condemned by public health experts. Title 42 has upended decades of asylum law. Expelling nearly 2 million people has created a costly humanitarian disaster. It is past time to end this policy and refocus our values and resources as a nation to protect the right to asylum.

“When Ukrainians began fleeing war, the U.S. promptly let them in and exempted them from Title 42 expulsions. Why should Black, Brown, and Indigenous asylum seekers have to wait any longer and continue to endure these unlawful and dangerous expulsions? Backpedaling the rescission of Title 42 makes the Biden administration further complicit with a racist policy that was designed as an attack on the very foundations of refugee protection policy. Once again, we call on the Biden administration and members of Congress to resume asylum processing at the border. The United States has the obligation, capacity and resources to reopen ports of entry to people seeking protection.” 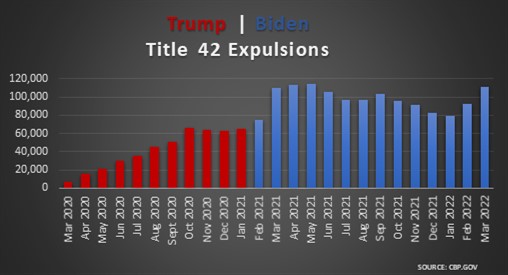