Salvadoran asylum seeker Alejandra Barrera, a transgender woman who has been locked up in a U.S. Immigration and Customs Enforcement (ICE) jail in New Mexico for 19 months, filed a petition for a Writ of Habeas Corpus in federal court today to demand her release. 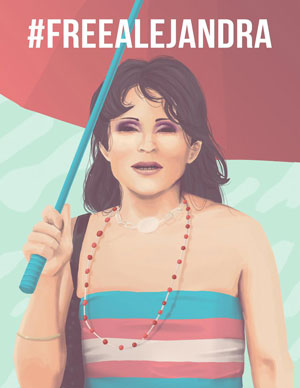 Ms. Barrera has been legally supported in her petition by the National Immigrant Justice Center. She has also counted on tireless support from the TransLatin@ Coalition, Amnesty International, and members of congress, as well as the 30,000+ people who signed a Change.org petition demanding her release.

Since her entry into the United States over a year and a half ago, Ms. Barrera has been held in the transgender unit at Cibola County Correctional Center. Last month, Alejandra and other women held in the same unit sent open letters to legal organizations and the press condemning the conditions they'd been held in. NIJC received a letter that specifically rebutted claims made by ICE after the agency conducted a promotional photo shoot in the unit.

That letter states: "This writing is an exact response to the lies and tricks that have been told on the internet and in the media: the photos that were published by ICE...are a complete falsehood." It goes on to allege that the benefits enjoyed by the women featured in ICE's photos — access to a beauty salon, outdoor space and recreation, and good food — were a show put on for the media and the cameras. Worse yet, it details the use of solitary confinement, and lack of medical care for those with HIV, depression, and skin infections.

Alejandra suffers from a progressive medical condition that has gone untreated while she has been detained. If left untreated, the illness could permanently affect her cognitive abilities and could cause severe complications and even death, according to one independent medical report.

"We ask for an investigation, we ask that the LGBTQ community support us, we ask that the truth be told in the media and to national and international organizations for civil liberties," the letter concludes. "Do not wait to act until someone else dies."

NIJC is proud to stand by Alejandra and the other women in her unit as they fight for better, freer futures for themselves. Below is the letter NIJC received from women in the transgender unit at Cibola. An English translation follows. 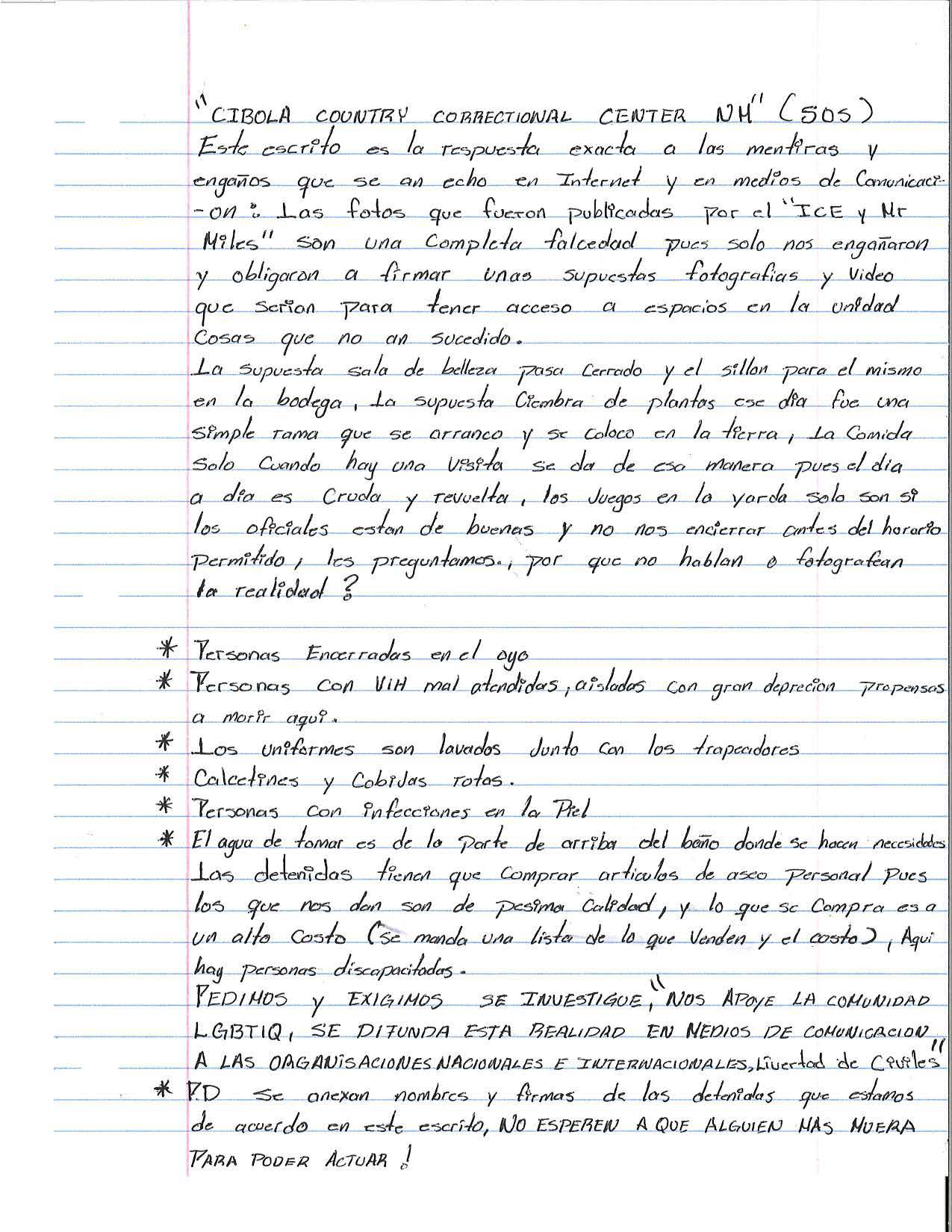 English translation of the letter:

This writing is an exact response to the lies and tricks that have been told on the internet and in the media: the photos that were published by ICE and Mr. Miles are a complete falsehood. They tricked us, and forced us to sign some photographs and videos, in order for us to have access to spaces in the unit and for things that have not happened.

The supposed beauty parlor is always closed, and the chairs for the same are in storage. The supposed gardening of plants that day was simply a stick that was torn off a tree and put into the ground. The food is only that way when there are visits, from day to day it is raw and mixed up. The games in the yard only happen if the officials are in a good mood and don’t lock us up before the permitted hour. We ask them: Why do you not speak of or photograph reality?

The detained women must buy personal hygiene items because the ones they give us are of a terrible quality, and what can be bought has a high price (see attached list of items and their costs). There are disabled people here.

WE ASK AND DEMAND AN INVESTIGATION, THAT THE LGBTQ COMMUNITY SUPPORT US, THAT THE TRUTH BE TOLD VIA THE MEDIA AND TO NATIONAL AND INTERNATIONAL ORGANIZATIONS FOR CIVIL LIBERTIES.

P.S. We attach the names and signatures of the detained women who are in agreement with this writing. DO NOT WAIT UNTIL SOMEONE ELSE DIES TO ACT.

Alejandra Oliva is a communications coordinator at NIJC.