Thank you for protecting families on #GivingTuesday!

Thanks to hundreds of generous supporters, NIJC exceeded our #GivingTuesday goal, raising $58,000 to reunite separated families and help newly arriving families access their rights so they can begin safe lives in the United States! THANK YOU for your generosity and compassion. 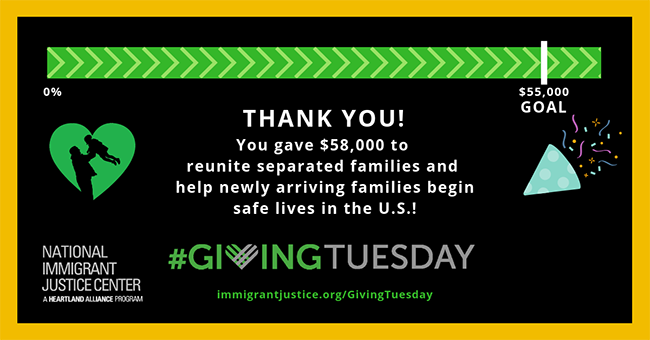 1. Call the Capitol switchboard at (202) 224-3121 and ask to speak to your senators and representative. Demand they speak out to oppose unconscionable acts of force by the U.S. government, like firing tear gas on men, women, and children seeking asylum at the border.

2. U.S Immigration and Customs Enforcement (ICE) uses billions of taxpayer dollars to separate parents from their children and lock up 40,000 people every day in an abusive detention system, including asylum seekers. Tell your members of Congress to stop funding family separation and mass incarceration.

Ms. Q.
A mother who, in December, was finally reunited with her four-year-old son after eight months of being separated and imprisoned. They arrived at the U.S. border seeking safety and sued the U.S. government for refusing to reunite them. In September, Jonathan Blitzer interviewed this mother and shared her heartbreaking story in The New Yorker. NIJC represents this mother and her son.

Olga and Marbel
Olga and Marbel are mothers from Honduras whom the U.S. government separated from their children at the border and detained in separate immigration jails. NIJC represents these mothers. Watch these mothers talk about their experiences on CNN on Anderson Cooper 360.

Jose and Marta
The U.S. government separated Jose and his three-year-old daughter Marta at the border, detained them for months in separate facilities across the country, and refused to reunite them until a judge ordered Jose's release. NIJC's Gianna Borroto spoke to The New York Times about representing Marta and fighting for her to be with her father again. Read Jose and Marta's heartbreaking story in The New York Times.

Ms. L. and S.
Ms. L. and her daughter S. shared their experience in The New York Times Magazine cover story of fleeing the Democratic Republic of Congo, being forcibly separated at the U.S. border, and detained in different states for months as they tried to seek safety in the United States. Volunteer attorneys from Locke Lord LLP and NIJC attorneys are representing them in their asylum cases, and Interfaith Community for Detained Immigrants is providing Ms. L. and S. shelter and support. Read Ms. L. and her daughter S.'s story in The New York Times Magazine.

Juan and Gricelda
Juan and his three-year-old daughter Gricelda (pictured below) fled Guatemala and attempted to seek asylum at the U.S. border. The Department of Homeland Security forcibly separated and detained them. They were separated for months. NIJC helped them get freed from detention and reunite, and is still providing them legal assistance. Read more about Juan and Gricelda in VICE News.