Sanchez Family Celebrates Freedom from Fear of Deportation and Separation 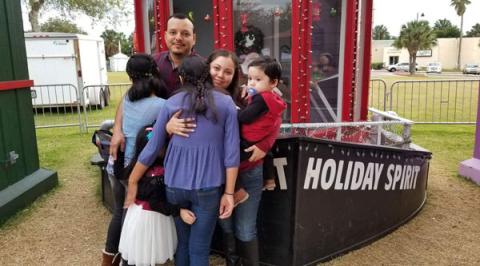 Last year, we shared with you the story of Irma and Oscar Sanchez, who were taking their infant son to the emergency room near Brownsville, Texas, when they were intercepted by U.S. Immigration and Customs Enforcement agents, questioned, and put into immigration proceedings. Their community rallied around them, including the Mennonite Central Committee, who connected the family with the National Immigrant Justice Center for legal representation.

Nearly a year after their immigration hearing, Irma and Oscar learned this month that they have been granted lawful permanent resident status. They spoke with NPR again last week, about the difficult wait to find out whether they'd be allowed to remain in the United States with their four U.S. citizen children - and about their future now that their status is secured.

"We never knew if we'd be together [this Christmas] because of our legal situation," Oscar told NPR. "But going forward, I think we'll have more secure Christmases now that we're able to be here, now that they won't separate us. You can say relaxing, peaceful."

Listen to Irma and Oscar's most recent interview with NPR:

At the close of a year that has thrown so many American and immigrant families into turmoil, and when so many people's lives remain in the balance, the Sanchez family's story is an important reminder that community support and legal counsel makes a difference. We're grateful for the support NIJC has received that allows us to continue to help families like the Sanchezes.