A broad-based coalition of more than 100 organizations working to reform federal criminal justice laws and policies has released recommendations for the incoming Biden-Harris administration and 117th Congress that include calls to decriminalize migration. The National Immigrant Justice Center (NIJC) supports the Justice Roundtable coalition’s recommendations for the administration to suspend criminal prosecutions for unauthorized entry and reentry and for Congress to repeal the laws used to criminalize people for their manner of entry into the United States. 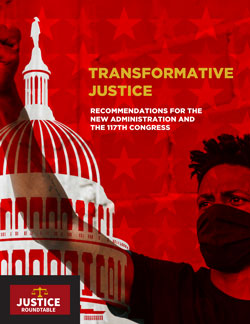 NIJC released a report in July 2020 examining the history of the racist roots of migration prosecution laws and how they have fueled systems of mass incarceration. The report documented how the U.S. government’s prosecution of unauthorized entry and reentry has consistently resulted in permanent separation of family members, routine violation of international and domestic asylum law, violations of basic due process protections, and persistent dehumanizing and racist treatment of migrants by federal officials, including immigration officers.Demands to repeal Sections 1325 and 1326 rose to prominence in the national press during the 2019 Democratic presidential primary debates, but immigrant rights advocates and communities have advocated for repeal of these provisions for decades.

The Justice Roundtable recommendations discuss how the breadth of the COVID-19 crisis in federal detention is a symptom of harsh sentencing practices, excessive pretrial detention, and overcrowding in prisons and jails that have plagued the federal criminal justice system for decades and must be confronted. An average of 11,100 people are in federal prisons on any given day serving time for migration-related offenses. About 13,600 others are held in pre-trial detention by the U.S. Marshals. The Bureau of Prisons reports that over 17,000 people in the system had tested positive for the virus as of October 2020, and 138 incarcerated people and two staff members had died. People facing migration-related prosecutions are experiencing deadly harm in prolonged detention in federal prison as they wait for federal court hearings that have been postponed during the coronavirus pandemic.

Removing the threat of criminal penalties against people who enter the United States without authorization would reduce the burden on federal criminal courts and mitigate the harm already inflicted on immigrant communities. The deeply racist origins of these laws, first introduced by an avowed white supremacist senator in 1929, must not form the basis for any legitimate government policy in 2020. Repealing these laws is an essential step toward ending systemic injustices, reducing mass incarceration, and protecting fundamental human rights.

Jesse Franzblau is a senior policy analyst at the National Immigrant Justice Center.