New Documents Illuminate a Dark Pattern of Abuse in ICA-Farmville

Reckless actions by U.S. Immigration and Customs Enforcement (ICE) and its private prison contractor Immigration Centers of America (ICA) have subjected people detained at the immigration prison in Farmville, Virginia, to a massive COVID-19 outbreak and the repeated use of violent force by guards. Documents, newly obtained through Freedom of Information Act (FOIA) requests, show that a years-long history of abuse foreshadowed this tragedy. These records emerge as ICA partners with ICE to pursue contracts to build massive new prison complexes to detain immigrants. Tragically, on August 6, ICE also announced the death of a 72-year-old man from COVID-19. He had been held in ICA-Farmville for three months.

The records were obtained in response to FOIA requests and a lawsuit filed by the Advancement Project National Office, which is releasing the documents now in coordination with the community groups La ColectiVA and Sanctuary DMV, as well as the Detention Watch Network (DWN) and the National Immigrant Justice Center (NIJC), as part of the campaign to demand the urgent release of everyone detained in the facility. For months, the groups have been working with a coalition of community organizations and the family members of people inside to demand that Virginia elected officials take actions to get people out of the facility, where the overwhelming majority of people inside have tested positive for COVID-19. In June of this year, ICE transferred 74 people from detention centers in Florida and Arizona. The transfer, compounded by the irresponsible management within the facility, led to a dramatic spike in infections. There are currently at least 259 active cases of COVID-19 in isolation or under monitoring out of 299 people being held at the facility (with 339 total COVID-19 cases reported over time). At least six people inside have been hospitalized with severe symptoms. As people have gone on hunger strikes, guards have used pepper spray and retaliated against protesters as fear spread with the growing number of infections.

The crisis unfolding in ICA-Farmville has raised the alarm about people’s safety and the nature of ICE detention. The records released today provide new evidence of past abuse and ongoing impunity, including: 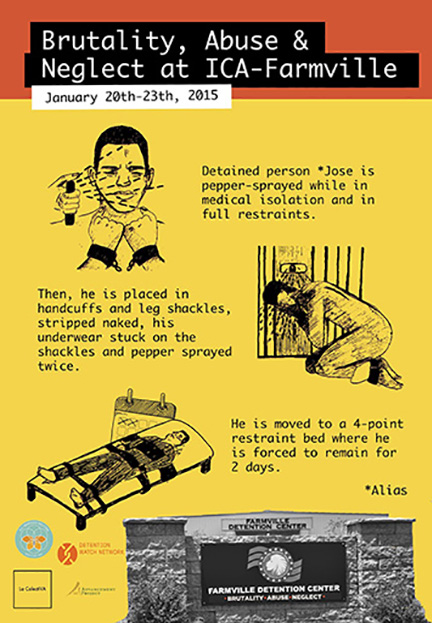 These incidents, which occurred far before the current crisis, demonstrate the neglect and abuse that has been going on at ICA-Farmville for years, and mirror the current abuse taking place during the pandemic. ICA-Farmville Director Jeffrey Crawford revealed in a court declaration on July 9, 2020, that guards at the facility used pepper spray on people inside in multiple instances in the weeks prior. On June 20, 2020, guards used pepper spray in response to a protest. Two days later, guards in riot gear responded to a protest by firing what ICE said was a “noise-distracting round” in a dorm housing an estimated 80 people, and again used pepper spray. Guards used pepper spray again on July 1, 2020, on people who reportedly refused to assemble for morning attendance. Additionally, the Department of Homeland Security (DHS) Office of Detention Oversight found several deficiencies during an inspection of ICA-Farmville in early June, including negligent medical care.

The ICA-Farmville detention center operates under an Inter-Governmental Service Agreement (IGSA), a pernicious form of contracting ICE has used for years to hand out billions to private prison companies while bypassing the public bidding process. ICA-Farmville’s IGSA, and many others like it, operate through what is essentially a kickback scheme, wherein the town gets a small cut of the private prison company’s profits for hosting the facility. Under this arrangement, the town of Farmville contracts directly with ICE but has a side agreement with ICA. Documents released by NIJC showed that last year, when there were more than 700 people detained in the facility, the town of Farmville was getting a cut of around $20,000 a month, while the company took in around $2 million to detain people for ICE. ICA-Farmville’s contract gives the company more than $120 per-person detained, per-day, with incremental increases for every additional person held over 500, building in a profit-driven incentive to keep people locked in detention. This “middleman contracting” arrangement has also been found to be improper under federal procurement law, and stifles accountability for violations that occur within the facility walls.

Despite having a contract directly with ICE, Farmville officials are willfully blind when it comes to the treatment of the people detained in its own prison. In response to FOIA requests filed by NIJC in April 2020, the town of Farmville said they had “no records” of policy guidance or correspondence with ICE or ICA relating to the management of COVID-19 in the detention center. The lack of communication with the town illustrates how the privatized immigration detention scheme shields companies from transparency and accountability, at the expense of people trapped inside.

After ICE transferred 74 people to Farmville from detention centers in other states in June 2020, NIJC filed another request to the town of Farmville asking for communications regarding the transfer and subsequent spike in COVID-19 cases. In response, town officials released a letter from ICA-Farmville Director Crawford to the Farmville mayor and an email to the town manager. In the correspondence, Crawford made no mention of ongoing lawsuits or complaints about abuse and the facility’s inadequate response to the pandemic. Crawford also claimed that ICA-Farmville had passed its last seven ICE audits with a 100 percent compliance rating, but failed to mention the consistent reporting of abuse in ICE discrepancy reports and inspections over the years.

The records released today further illustrate the utter failure of ICE’s oversight system. The Contract Discrepancy reports discussed above were produced internally because ICA-Farmville has a “quality assurance surveillance plan” (QASP) included in its contract, which requires ICE to look into reports of abuse at private facilities. The DHS Office of the Inspector General (OIG), however, found in 2019 that only 28 out of the 106 ICE contracts included a QASP in their contracts. Even for contracts that have a QASP, the DHS inspector general further found that, despite documenting thousands of deficiencies and instances of serious harm to detainees that occurred from 2015 to 2018, ICE imposed financial penalties on only two occasions; one of those was for the aforementioned excessive use of pepper spray in January 2017 in ICA-Farmville.

ICE contractors like Nakamoto group also carry out inspections that have been called “useless” by ICE employees, because they are nearly impossible to fail. All inspections are scheduled in advance, giving the facility time to temporarily modify practices to “pass” the inspection. When the inspectors do report on abuse and grievances, as they consistently do with ICA-Farmville, there are no real accountability mechanisms to prevent further abuse.

ICE and ICA’s violent response to the COVID-19 outbreak in Farmville is reflective of the larger problems with a detention system that profits off of the denial of basic civil and human rights. People inside ICA-Farmville have consistently called for their release from detention since the facility opened amidst protest over a decade ago. There were hunger strikes in 2019 in response to the handling of a mumps outbreak, and community groups, public officials, and public health experts are increasingly demanding people be freed from the facility. In June 2020, twenty-five organizations called for ICE to release all those detained after the aforementioned incidents of pepper spray against protesters. The new records expose the undeniable history of brutality, abuse, neglect, and impunity within ICA-Farmville walls, as the company running the facility seeks to sell its brand as safe and humane. It is critical for elected officials, including members of Congress, to join the call to demand the administration release people immediately to avoid further abuse and harm to people inside.