Finding the equation for a clean Dream Act: Margaret's story

Margaret* hopes to someday become a university math professor. She solves linear equations for fun and works as a math tutor.

She was among the estimated 154,000 Dreamers who were eligible to renew their protection under Deferred Action for Childhood Arrivals (DACA) before the program ended in October. She attended an NIJC DACA renewal clinic and extended her reprieve from deportation.

"I’m one of the lucky ones able to renew my DACA,” Margaret said, “but it has a two-year expiration date. If am able to go to school and graduate within two years, I will graduate undocumented, again. So, it’s like I would finally get my bachelors and not be able to work… I would finally be reaching one goal while something else is being taken away.”

The United States is Margaret’s home and she wants to accomplish her dream here. Whether she can do so will depend on Congress passing legislation to provide DACA recipients a chance at permanent status. Right now the best bet for her and her family to stay together, in the long run, is a clean Dream Act – a path to lawful status for DACA recipients free of any barriers or deportation threats for loved ones who are undocumented.

“I think the biggest thing is that I have been raised in this country,” Margaret said. “Even though I have been here since I was eight, realistically speaking I don’t remember existing till I was four, so it’s just four years living somewhere else, and four years isn’t enough to feel like you belong to a place.”

Margaret moved to the United States from Mexico in 1999, when her father came to work a well-paying factory job.

“I grew up around Americans of different ethnicities, races; obviously I learned to speak English really well,” she said. “I know all the opportunities that are here, I know how to be an American. I don’t know how to be anything else.”

For Margaret, being in the United States is not just about accomplishing her own dreams. She has a young son and two younger brothers, all U.S. citizens, whom she wants to help succeed.

Deportation was always a looming threat for Margaret until the DACA program began. She said her family tried to find a way for her to obtain lawful status and do things the "'right way' - but there is always a roadblock.”

"My mom’s brother petitioned for her, my sister can petition for my parents, and I’m just sitting here twiddling my thumbs,” Margaret said.

“[With DACA],I have a social security number, but all I can really do is work," Margaret said. "I can work, I can have a driver’s license, I can have a bank account, I can have a credit card. I just can’t get any federal aid.

“I am what’s called un-eligible non-resident.”

Listen to Margaret talk about how she stays politically engaged 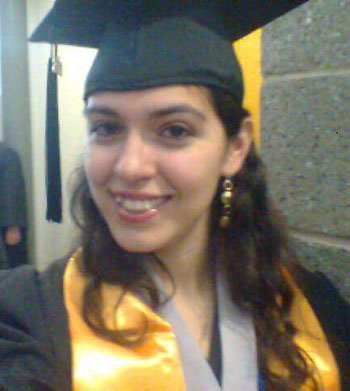 One step forward, two steps back

Margaret’s first job after she got work authorization under DACA was at a daycare center.

“I was working there for a year and I wasn’t in school yet, and I thought, I think I can pay for school out of pocket,” she said.

“At that time it was $100 dollars per credit hour. I was doing the spring, summer and fall semester. I was doing them all in a row because I wanted to make sure to finish, it was manageable, but it was a lot, with working and having a two-year-old. I paid it for two whole years.”

After finishing her associate’s degree with honors, Margaret met an academic counselor who wanted to help her finish her four-year degree. “That is when I applied for IIT [Illinois Institute of Technology], and I had more support. The counselor helped me find resources nobody knows about,” she said.

“I got an honor society scholarship, and I got a STEM scholarship. I thought I could get a student loan but when I went to apply the financial aid advisor said I can’t. I was like, why not? She goes because you’re not a citizen. She said I could only apply for a private loan. But, I can’t [do that either] because I have no co-signer. My only co-signer would be my parents, who are not U.S. citizens.”

Because Margaret cannot afford the difference needed to cover tuition, she has put school on hold. Until Congress passes a clear pathway to citizenship, she feels stuck.

“People, who can vote, like my friends, I tell them what’s going on, make them more aware of stuff because if I can’t vote, I can at least help them make the correct choice. I tell them, you understand my situation.”

*Margaret's name has been changed to protect her privacy.

Isabel Sophia Dieppa is a communications coordinator at the National Immigrant Justice Center.