#FamiliesBelongTogether: Immigrant Moms Speak Out About Trauma of Having their Children Taken at the Border

This is what Olga told CNN’s Anderson Cooper 360° today from the San Diego prison where she has been held for weeks:

My kids have never been separated from me. My son told me on the phone he misses me, and when am I going to be with him again. I told him I didn’t know.

National Immigrant Justice Center clients Olga and Marbel courageously shared their stories with the nation tonight because they are desperate to reunite with their children. They also spoke out to help stop the Trump administration’s cruel practice of intentionally separating families at the border.

Olga and Marbel are among the more than 600 parents who Customs and Border Patrol tore from their children in the first two weeks of May alone. Today, in cities across the country, Americans came out for a National Day of Action for Children to call for an end to these family separation policies and tell the U.S. government that families belong together. 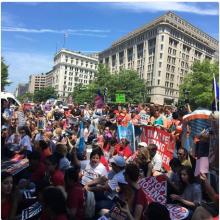 Here are 5 things you can do right now to help us stop this administration’s cruel family separation policies:

As Marbel and Olga beg to see their children and be allowed to seek asylum in the United States, we ask you to stand by their sides and help us lift up their voices until they and thousands of other immigrant parents are reunited with their children.