Two months ago, the Executive Branch sealed the U.S. border and began mass expulsions of over 20,000 migrants, returning countless asylum seekers to the very harm they fled. However, closing the border under the guise of public health was a long-standing project of the Trump administration’s anti-immigrant agenda—long before this global pandemic.

Recently released government data now reveals the extent of the devastating collapse of the U.S. asylum system leading up to and during the COVID-19 pandemic. U.S. Citizenship & Immigration Services (USCIS) publicized data regarding the findings and frequency of preliminary screenings the agency provides to all arriving asylum seekers, from April 2019 to April 2020. These screenings—or Credible Fear Interviews (CFI)—are required to begin the asylum process.

As shown below, USCIS’ data paints a dire picture of the steep decline caused by a patchwork of anti-asylum policies engineered to close the border on asylum seekers. As a senior official recently stated, “None of these [policies] work in a silo.” These interlocking policies, displayed in circular form below, contribute cumulatively to the complete closure of the southern border to those in need of protection. 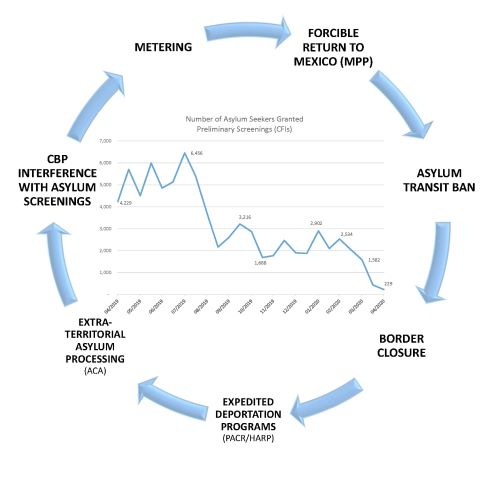 CREDIBLE FEAR INTERVIEWS (CFI) are preliminary screenings for individuals subject to expedited removal proceedings at or near the border. In essence, CFIs are a gateway to the full asylum process consistent with U.S. and international law, including hearings before an immigration judge. A decline in CFIs means that asylum seekers have not been able to enter the U.S.

ASYLUM TRANSIT BAN: Since September 2019, anyone who travels through a third country without seeking status is barred from asylum eligibility through a regulation currently challenged in a federal appeals court. This ban effectively bars all non-Mexican asylum seekers from asylum protection. Asylum seekers subject to the asylum transit ban are eligible for alternative forms of relief which provide fewer protections, foreclose family reunification, and place a higher burden of proof on applicants.

BORDER CLOSURE: Rather than tend to the domestic public health crisis brewing in the U.S., the Trump Administration has turned the COVID-19 pandemic into a new tool for repressing asylum seekers. Since March 20, Customs and Border Protection (CBP) agents have unlawfully expelled over 20,000 individuals (including over 1,000 unaccompanied children) pursuant to an Order issued by the Centers for Disease Control and Prevention—violating decades of U.S. and international law. As of May 19, CBP’s authority to conduct those unlawful expulsions has been extended indefinitely.

CBP INTERFERENCE: CBP piloted a CFI program in the Summer of 2019 that allowed CBP officers, rather than trained USCIS asylum officers, to conduct credible fear interviews. CBP has disclosed little about this troubling program, which requires asylum seekers, recently arrived and fleeing fresh trauma, to articulate their fear of return to uniformed CBP officers (whose primary purpose is law enforcement). Since then, CBP officers have processed 4,826 CFIs with a 50% higher denial rates than USCIS. Families have sued to challenge this unlawful policy.

EXPEDITED DEPORTATION PROGRAMS refer to two new programs – the Prompt Asylum Claim Review (PACR), applying to individuals other than Mexico, and the Humanitarian Asylum Review Process (HARP), applying to Mexican nationals. These programs rush asylum seekers through an alarmingly abbreviated CFI process without access to counsel while they remain in harsh CBP conditions, with the purpose of ensuring prompt deportation. Piloted in October 2019 and expanded in February 2020, these programs have applied to 3,700 asylum seekers normally eligible for CFIs—deterring countless asylum seekers from presenting their bona fide claims.

EXTRA-TERRITORIAL ASYLUM PROCESSING: From November 2019 to present, over 1,000 asylum seekers (mostly women and children) were forcibly sent to seek asylum in Guatemala —despite overwhelming evidence that Guatemala neither has the safety nor the infrastructure to process their claims. A legal challenge (brought by NIJC et al.) to the Asylum Cooperative Agreements (ACA) that ushered in extra-territorial processing is ongoing, but the administration seeks to expand it to other similarly ill-suited Central American nations.

FORCIBLE RETURN TO MEXICO (MPP): Since January 2019, the Remain-in-Mexico or “Migrant Protection Protocols” policy has forced 62,000 adults and children to seek shelter in Mexico while their cases are pending in U.S. immigration courts. Countless asylum-seeking families have suffered life-threatening violence, extortions, rape, and abductions. MPP has been a powerful tool to force asylum seekers to abandon their claims.

METERING: Under false pretenses that the U.S. is ‘full,’ tens of thousands have been forced to wait for their turn to trickle into the United States for screenings. The number of individuals subjected to the metering policy has fluctuated; within the timeframe of the data released, 18,700 were forced to await entry in May 2019; the number rose to 26,000 by August—coinciding with a sharp downturn in CFIs.

For more on the ongoing assault on the right to seek asylum, see the National Immigrant Justice Center’s asylum timeline.