As someone who works closely with people in immigration detention, I’ve been able to see the ways that the COVID-19 crisis has been completely mismanaged by detention centers and prisons. While the health effects to those incarcerated by Immigration and Customs Enforcement (ICE) cannot be overstated, the COVID-19 crisis has also affected my clients’ right to due process.

The case of one of my clients, Luke, illustrates these threats. Even though Luke eventually won his case allowing him to remain a legal permanent resident, the story of his merits hearing in mid-May, nearly two months after COVID-19 changed so much of everyday life, shows the ways in which the Executive Office for Immigration Review’s (EOIR) mismanagement of the detained immigration courts is failing those in ICE custody, immigration advocates, and the court staff – despite endless calls by immigration judges to close the courts.

Even before the pandemic, people in detention would appear through video teleconference, for hearings that would determine whether or not they could stay in the country. Studies have shown that video teleconference can adversely affect the results of a case, which is why we usually filed motions for our clients to appear in person at these hearings. In our experience, video hearings put our clients at a visual and auditory disadvantage as judges decide their fates. This is important because often, like in Luke’s case, the decision comes down to discretion, meaning whether the judge feels the client deserves to win or not. When a client is over a TV screen, it seems hard for a judge to connect with the client and see him as a real person.   In-person appearances have also allowed me to communicate with clients more easily: I can make eye contact if they get nervous when on the stand, or request a recess for private conversations. In addition, in-person interpretation is much better because it can be done simultaneously without much interruption, and the client can read any new evidence presented in the court for himself, rather than having it read to him over the phone. However, for Luke, requesting an in-person hearing was not possible, since the court and ICE mandated that detained immigrants appear for all their hearings via video. 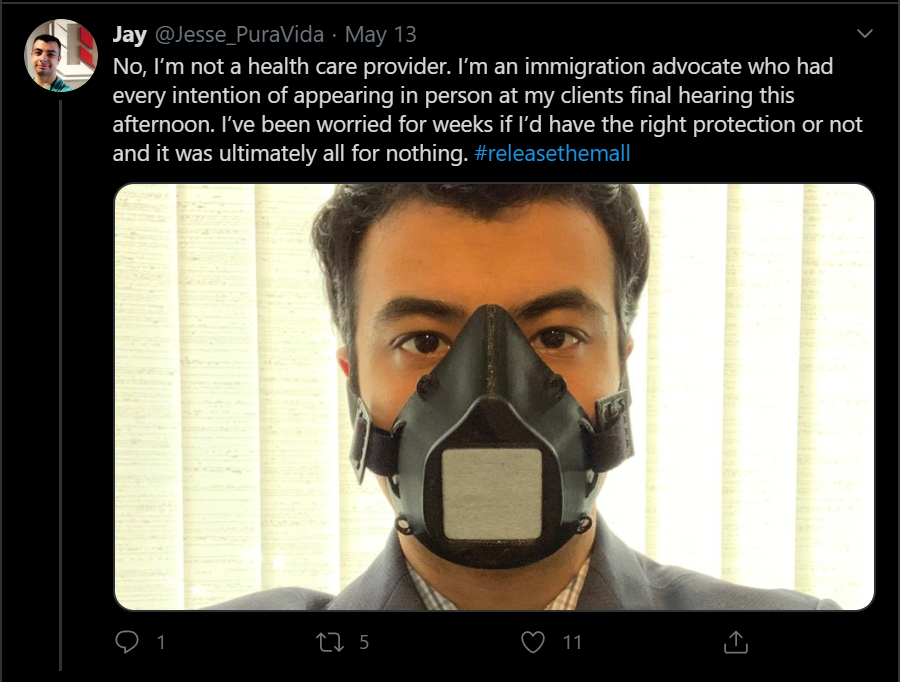 Still, I had every intention of going to Luke’s merits hearing in person, so that I could at least be in the courtroom with the judge even if my client could not. Appearing from the court also meant that I would be able to see my client over video, and he would be able to see me.  I had my mask and I was making plans to get to the court. It had never before occurred to me that I might need to call into a final hearing rather than appear in person. During the first month of the COVID-19 pandemic, NIJC attorneys were still attending hearings in-person because the courtrooms easily met the six feet social distancing guidelines between the judge’s bench and the attorneys’ tables. It was important to me to be in the same room as the judge– even if my client had to be over video. However, when I called the court to confirm that I could go in, I was told that the judges preferred that we call in. There was no court mandate stating attorneys must appear telephonically, but I had to weigh the costs and benefits of advocating for my client in person versus potentially upsetting the judge, who would ultimately make the decision on whether or not my client could remain in the United States. I decided to respect the judge’s request and appear telephonically, separated from both my client and the judge.

The challenge of representing my client remotely was exacerbated by having never met the judge who presided over Luke’s trial. Since the onset of COVID-19 social distancing protocols, the judges who usually sit in non-detained court, which is currently closed, have been cycling through the detention bench. As a result, Luke’s trial went forward before a different judge than the one who presided over his preliminary hearings. The judge had never heard detained cases before and I had no idea how he would react to the details of Luke’s case, which was important because the case mostly came down to discretionary factors.

I also wanted to call two witnesses: a licensed clinical professional counselor who had evaluated Luke, and Luke’s mother. Luke’s mother does not speak English, so I also filed a motion for an interpreter. A week before the hearing, I got a phone call from the court and was told I couldn’t have both--they couldn’t call my client’s mother and call an interpreter at the same time. One day before the hearing, this changed again - I got a call saying that the judge now did have a conference call line. I had to quickly prepare Luke’s mother if we needed her to testify.

During the final hearing in May, Luke’s video teleconference system limited the scope of his perspective to just the judge’s face. He could not make eye contact with me or even reach across the table for a box of tissues.

Despite these hurdles, most of the trial went smoothly. I was able to get the judge and trial attorney to agree to waive the two witnesses’ testimony and give full weight to their affidavits instead. However, when Luke took the stand to talk about his own life, I was nervous to see how it would go. Luke was detained, and we had been practicing his testimony over the phone, but we had assumed that at least I would be able to attend the hearing in person, and he could see me over the video feed. During our practices, I had been telling him, “You will see me in person, don’t be nervous, if someone interrupts, you can just make eye contact with me; don’t worry about anyone else in the room.” But in reality, now he was staring at the judge, answering questions on video, and listening to me on the phone. There was also a lot of background noise at McHenry County Jail, where he was detained, so I had to sometimes repeat myself. I couldn’t hear myself speak, and I wasn’t sure if he was able to hear.

There was also a moment when the judge asked a question we were unprepared for: would my client accept voluntary departure in lieu of protection known as cancellation of removal. Voluntary departure is a sort of alternative to deportation — if the judge did end up deciding against Luke, he would still have to leave the country, but without a deportation order on his record. This meant his mother could potentially petition for his return. Luke and I hadn’t discussed this in much detail as it is also discretionary and we were really working towards Luke’s preferred outcome: keeping his green card and remaining in the United States. I asked for a one-on-one conversation with my client, off the record. The judge agreed, and stopped recording the call, but he and the government attorney stayed on the line as I talked to Luke about what his options were around voluntary departure. This didn’t give us nearly the privacy or freedom that we usually have during in-person meetings, and I didn’t feel like I could reassure my client that it didn’t necessarily mean that the judge had already decided against him.

When the judge finally issued his decision, it felt like a roller coaster. He talked about the positives and the negatives of the case during his oral decision. I kept wavering between the thought of wondering if he would deny or grant relief, but ultimately the judge granted  cancellation of removal. My client was able to keep his green card.

Now, there was the matter of getting my client out of detention.

Before the pandemic, my client would have been in the courtroom, along with his mother, and he would have just walked out that same day. Because of the remote hearing, he had to spend another night in jail. McHenry County Jail is not far out of Chicago--only about an hour and a half--and ICE brought him to Broadview Processing Center, a closer facility, the next day. This transfer was convenient, but also meant more contact with a new set of guards and other people who also were being released--a liability in the midst of a pandemic.

When I got confirmation at 9 a.m. the next morning that the transfer was going through, I called his parents, who were already on the road from out of state to pick him up. Luke had been in detention since August 2018, and they were excited to see their son.

A few hours later, I got a phone call from Luke’s parents: they had picked up Luke, and they were on the road home.

Fortunately, everything turned out well for Luke.  However, others are not as lucky.  COVID-19 has profoundly re-shaped day-to-day life. More than three months into the pandemic, the immigration courts must address this reality with measures that are both practical and fair. In the non-detained context, this means keeping the courts closed until all parties can safely appear in court.  For detained hearings, Luke’s case shows that having hearings move forward can be beneficial to decrease the risks to immigrants’ health.  Had the court closed and Luke’s hearing been cancelled, he would still be sitting in jail today, facing a heightened risk of contracting COVID-19.

Therefore NIJC advocates for detained hearings to continue, at least in cases where the detained immigrant wants their case to move forward. However, the court must adapt to this new reality and implement measures that ensure fundamental fairness to detained immigrants. This includes finding a way to safely resume hearings where judges and representatives can all appear together in the courtroom, or at minimum conducting hearings using video teleconference technology that is available to all parties, rather than just the judge. The court has been using VTC technology for over a decade, long before most of us were using it in our daily lives, so surely it could find a way to securely allow attorneys and accredited representatives to participate over video as well. This accessibility is important during the pandemic, but as soon as it is safe to do so, we urge the court to completely end the use of VTC technology and allow individuals to be physically present for their day in court.

In addition, the court needs to expedite its ability to accept electronic filings across the nation, rather than just through the pilot project that exists currently. The court’s ad hoc email system—while a relief for attorneys who were saved a trip to the office and court to submit a paper filing–has not been without problems, as NIJC attorneys have found when appearing in court and learning that the judge did not receive a filing submitted via email.

Finally, the court needs to find a way to avoid the disruptions in cases that come with rotating a different judge onto the case for each hearing, with little or no notice ahead of time to attorneys. The current system has resulted in judges making life-changing decisions in cases with which they have little familiarity and has forced attorneys to adapt at the last minute to the whims of individual judges. The way that EOIR has been handling detention court during COVID-19 impedes attorneys and accredited representatives like me from giving the best representation we can to clients.

Jesse Johnson, Jr. is a BIA accredited representative at NIJC.