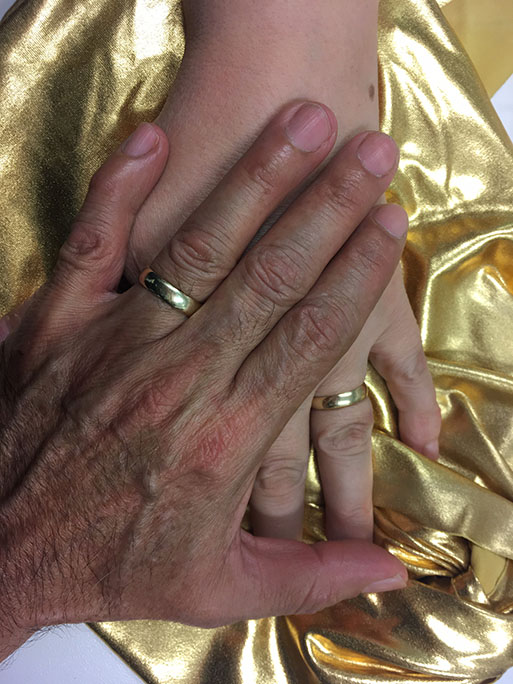 Emily* and Jose* credit two special ingredients for the success of their relationship: compromise and trust. The recently wed couple struck up a conversation outside of a laundromat 15 years ago. Despite the language barrier—Emily spoke only English, and Jose only Spanish—the two became friends. As they spent more time together, the unexpected happened: they fell in love.

Well I think we just saw each other and liked each other right away, Jose says.

The National Immigrant Justice Center is representing Emily and Jose as they begin the process for Jose to obtain his green card. Although they are nervous because the process is overwhelming, Emily says she is grateful for the legal help she received from NIJC and hopeful that securing Jose’s permanent resident status will help them finally have a stable foundation on which they can build their future together.

When Emily and Jose first met each other they could barely speak to one another. But, even through the language barrier, they were able to communicate. Emily practiced her Spanish and Jose practiced his English. From those conversations, Jose learned that Emily suffers from degenerative bone disease in her back.

The condition is known as Spinal Osteoarthritis, in which the protective cartilage that cushions the tops of bones breaks down. “It’s like, bone against bone. That’s why my back hurts so much,” says Emily, “It’s very painful.”
As Jose became more acquainted with Emily, he saw how her pain made doing daily tasks nearly impossible.

Jose took it upon himself to help her in her day-to-day routines. And as the couple spent more time together, Emily helped heal Jose’s emotional wounds. Two years before Jose met Emily, he had lost his brother, the only family member he had in the United States.

Listen to a snippet of Jose's love song for Emily.

After six months of seeing each other daily, Emily and her dogs Diamond and Fergie moved in with Jose. Fourteen years later, the couple married. “One day, he was like, why don’t we get married. I just at that time, I felt it. You know, that it was time. After 14 years it’s like, yeah it’s time,” Emily says.

But Emily and Jose now have new worries on their mind:  new federal rules proposed this month by the Trump administration could result in Jose being labeled a “public charge” by the U.S. government and put his green card application at risk.

The public charge test has been part of federal immigration law for decades. It was designed to identify people who may depend on government benefits. If the government determines someone is likely to become a public charge, the government can deny admission to the United States or refuse an application for lawful permanent residence. The Trump administration’s new public charge rule expands the list of benefits programs that could make a person ineligible for status, and adds poverty guidelines that threaten to disqualify Jose and most of NIJC’s clients. In addition, any applicant who is over 61 years of age will face hurdles to obtaining status.

Jose came to the United States fleeing poverty in Mexico. He started working as soon as he arrived to the United States. But, even though he has a full-time job, on his own he does not earn a household income of 250 percent above the poverty line, which the proposed rule considers as a negative factor.  He is also 60 years old—by the time an immigration officer reviews his green card application, he may have an additional strike against him for his age.

"I’ve always provided for myself, my thing is working, I have insurance through my work. … And thanks to god I still have the strength to work," Jose says.

The constant evolution of the public charge rule has made it difficult for immigrants like Jose to make sense of what is or is not possible for their futures in the United States.

Jose’s ability to remain in the United States and work is critical for Emily’s wellbeing. Her disease requires medication and constant physical assistance of another person. Just as important, they love each other, and married so they could stay together.

“I need my baby, I need him here,” says Emily, “Not just because I need him to go pick up my medicine, and do all that stuff, I love him so much and if they took him and said ‘well now, you gotta go back to Mexico,’ I would be totally devastated. You know like when you’ve been married for a long time and the other one passes away and then like a year later or six months later the other person dies? That’s what would happen to my heart....it would just shatter in a million pieces.”

"people just want to do it all on their own and it's like, 'no' you gotta go through the process."

Emily and Jose’s family petition is currently being reviewed by U.S. Citizenship and Immigration Services. They are unsure when they will receive the decision that will allow them to proceed with the rest of Jose’s application.
“My wish is that we stay together, forever and ever, amen,” says Emily.

Take action to tell the federal government that  Emily and Jose, and thousands of other American families who have been targeted by the Trump administration’s public charge rule, should not be forced to choose between the services they need and the people they love. Submit a comment via ProtectingImmigrantFamilies.org

*Jose and Emily's names have been changed for their privacy.