Budgeting for a Better Way

Principles for a Just Immigration Budget for 2022

“What would it mean if there was another way? If from the airport, they took you to a house instead of a jail… You would stay in that home, and the path would be one of waiting, waiting and hoping for an outcome that will light you up with joy when it comes to pass. That, in my opinion, would be a path worth remembering, a path that would build strength instead of shackling.... You would not lose who you are in this kind of process. You would not lose your dignity and you would not lose your pride... If there was another way, it would change everything.”

Immigrant communities bring vibrancy and resilience to the United States. Our communities and families are stronger when they include asylum seekers, refugees, green card holders, and undocumented immigrants, and we all have a stake in demanding immigration policymaking that ensures justice and respects human rights. Evidence-based inquiries reveal that the smart and humane budgetary approach to migration management is to significantly invest in legal services providers, processing systems centered around due process and dignity, and  community-based programs that deliver holistic social services.

Instead, for decades, the United States has spent billions of dollars on policing and detaining asylum seekers and immigrants, putting enforcement and deterrence at the heart of immigration policy. In 2021, Congress appropriated $23 billion toward Immigration and Customs Enforcement (ICE) and Customs and Border Protection (CBP), a shocking sum even when compared with traditional federal law enforcement agencies such as the Federal Bureau of Investigations, funded at $9.7 billion for the same year, and the Drug Enforcement Administration, at $2.3 billion. Since the inception of the Department of Homeland Security (DHS) just under 20 years ago, ICE’s budget has more than doubled and CBP’s has more than tripled. 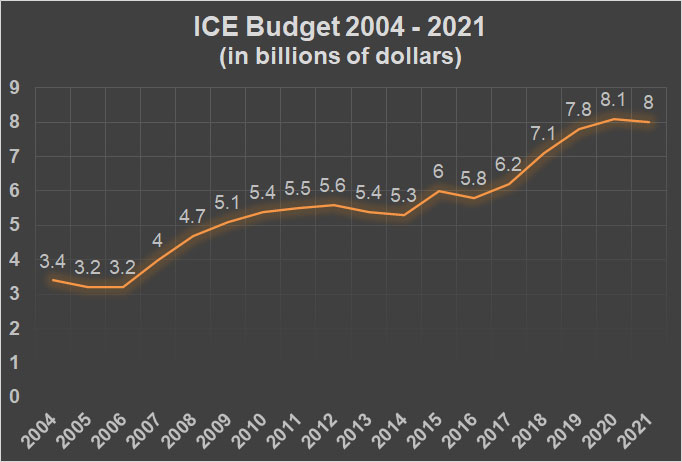 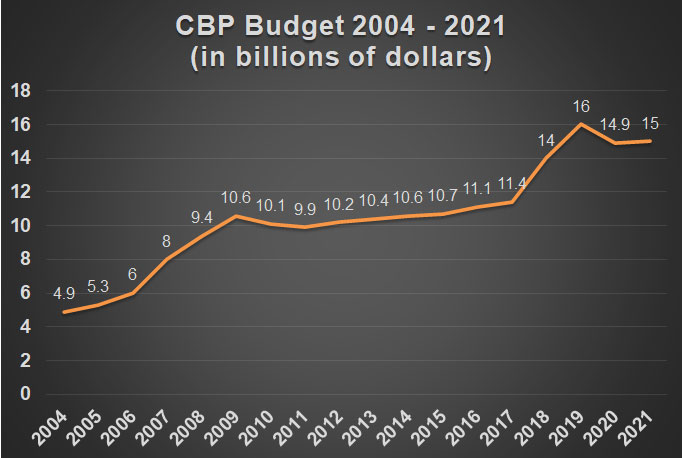 The consequences have been deadly, with harms inflicted disproportionately on Black, Brown, and Indigenous immigrant communities. The United States has deported and expelled countless asylum seekers to their deaths using dollars appropriated to militarize the border while choking asylum access and due process rights. Families are routinely separated, sometimes never to reunite. Black and Latinx youth are burdened with depression and anxiety while living in constant fear that their loved ones will be detained or deported while community-based legal and social services organizations remain starved for resources.

We must not be fooled into believing this deterrence- and enforcement-focused budget strategy has been driven by sound policy-making. No: the super-funding of immigration detention and enforcement has been propelled by the profit motives and persistent lobbying of the private prison and security industries and a political discourse grounded in racism and fear. Designing and funding immigration policy to be so cruel as to deter future migrants is not only inhumane, it has long been proven not to work toward its stated goal.

The United States immigration system is structured and funded to perpetuate rights abuses and undermine human dignity. Now is the time for bold action. The Biden administration has the unique opportunity to create a budget that reimagines the U.S. immigration system by divesting from detention and enforcement and investing in legal services and community-based programming that enhance all our communities’ safety and well-being.

NIJC embraces the Defund Hate campaign’s transformative budget vision that moves “Beyond the Enforcement Paradigm.” We were disappointed that the president’s April 9th “skinny budget” failed to make meaningful commitments toward such a paradigm shift, omitting any commitment to meaningful cuts in detention or enforcement. We urge President Biden and his administration to ensure that the following key priorities are reflected in its anticipated full budget proposals:

1. Divest from detention, with guardrails to ensure due process for those who remain detained

The DHS budget must propose a dramatic reduction in funds for immigration detention, ensuring that funding supports a downward trend in the number of those detained by ICE from today’s current levels. There is no rational justification for the continued use of carceral settings for immigration processing. ICE detention centers are rife with abuse and operate under a system of inspections and contracts that breed impunity. Detention for immigration processing is also unnecessary: studies consistently show that immigrants appear for their court proceedings voluntarily when provided the information and support they need, at rates of nearly 100% when represented by counsel.

Further, the DHS budget should explicitly provide that no funds are to be used by the federal government for the detention of families, children under 18, or transgender individuals. The practice of detaining children and families has been condemned by the American Academy of Pediatrics, which warns that “even short periods of detention can cause psychological trauma and long-term mental health risks for children.” Similarly, immigration detention poses extreme harms for transgender people, who ICE often places in solitary confinement and against whom sexual assault and abuse is alarmingly common.

The administration must also support including in the 2022 DHS Appropriations Act a provision protecting against prolonged detention without access to individualized custody determinations. This can be done through language that requires ICE to release people unless the agency can establish a justification for continued detention. Such a provision, which was included in section 219 of last year’s draft House DHS Appropriations Bill,  is crucial because ICE considers the vast majority of those in its custody to be subject to “mandatory custody” pursuant to arcane provisions of the Immigration and Nationality Act. Prolonged detention of immigrants without basic due process protections is an affront to the Constitution, but a routine part of the immigration system today — it has to end.

2. Divest from enforcement- and deterrence-centered approaches to immigration policy

As ICE and CBP’s budgets have ballooned, so too has the number of Border Patrol and ICE agents. Billions of dollars surged toward policies designed to relentlessly enforce the immigration laws in a punitive manner have had shameful results: racial profiling is common in localities with 287(g) agreements that allow local law enforcement to engage in federal immigration enforcement; border wall and barrier construction has disrupted border communities and devastated ecosystems; corruption and abusive behavior is alarmingly common among DHS personnel; and heightened immigration enforcement in nearly every corner of community life has created a sense of fear of public institutions that will not easily dissipate.

We urge the Biden administration to propose significant cuts in funding for ICE and Border Patrol agents, and ensure that guardrails and accountability mechanisms are in place for agents in the field. Specifically, the DHS Budget should request that Homeland Security Investigations (HSI) staffing and resources be firewalled from civil immigration enforcement, incorporating language that was included in section 220 of last year’s draft House DHS Appropriations Bill.

The administration has an exciting and historic opportunity to repair one of the most fundamentally unfair aspects of the immigration system — the due process crisis in U.S. immigration courts. Investing funds in appointed counsel for immigrants facing removal is a critical first step toward establishing fairness in immigration adjudications. It is also — as study after study reveals — the most efficient and humane way to ensure that immigrants appear for their court hearings.

Today, more than half of all immigrants facing deportation, including more than 80% of those detained, must represent themselves, opposite a federally funded prosecutor. People are far more likely to succeed in their claims to protection and lawful status in the United States with a lawyer by their side. This is not surprising — immigration law is notoriously complex and immigrants must navigate it in their second or third language, often while processing recent trauma. We urge the administration to establish a pilot program toward the ultimate goal of appointing counsel for all indigent immigrants in removal proceedings, a due process imperative too long ignored.

4. Invest in community-based and -supported case management and divest from surveillance-oriented alternatives-to-detention programs

Extensive research and analysis by civil society, including the United Nations High Commissioner for Refugees, has revealed best practices for community-based programming that supports immigrants through their immigration case. Such programs should: be operated by non-profits; provide robust case management; respect the dignity of all participants; and impose the least restrictive obligations, without the use of ankle monitors or other intrusive devices. Studies of alternatives-to-detention (ATD) programs around the world have found community-based programming to maintain average compliance rates of 90 percent or higher, while costing up to 80 percent less than detention.

In spite of this evidence, the United States continues to fund mass immigrant detention while  investing hundreds of millions in an ATD program known as the Intensive Supervision Appearance Program (ISAP). ISAP is funded through ICE and runs directly at odds with established best practices. ISAP participants regularly report experiencing harassment and mistreatment at their ICE check-ins, and that surveillance such as ankle monitoring severely restricts their ability to work and move freely in their communities. ICE’s ATD budget has grown exponentially in recent years while the detention budget has concurrently expanded, illustrating what advocates have long warned: ICE’s ATD program in fact serves as an alternative form of ICE custody, not an alternative to detention itself.

Reorienting the U.S. immigration system away from incarceration and toward justice requires a dramatic shift in the way ATDs are funded and operated. The administration must utilize the 2022 budget to begin phasing the ISAP program out entirely and, instead, investing in case management programming that is community-based, consistent with best practices, available for those who need it, and funded outside of the ICE and CBP accounts.

5. Invest in federally funded respite and welcoming centers and a trauma-informed approach to asylum processing

The United States’ asylum system is in ruins, decimated by four years of policies designed by Stephen Miller and other Trump-era leaders to effectively seal the border to asylum seekers. It is nearly impossible for most people to access asylum at the southern border. Despite opposition from public health experts and human rights advocates, the Biden administration has continued the Trump-era use of Title 42 to close the border under the faulty guise of public health concerns. Not unlike his predecessor, Biden’s Title 42 expulsions have exposed asylum seekers to unspeakable harms.

It is incumbent on the administration to end Title 42 expulsions and seize the opportunity to re-envision a border management approach that rejects deterrence and welcomes asylum seekers with dignity. Specifically, we urge the administration to invest in the creation of Border Reception and Welcome Centers, where asylum seekers can receive voluntary respite and social support services, along with an orientation to the asylum system and assistance with securing safe transportation to their final destination in the United States. These centers should be funded and operated  outside of ICE and CBP, through the Federal Emergency Management Agency or the Department of Health and Human Services, with nonprofit organizations providing contracted services. Critically, such programs must be established in consultation with border communities and use a trauma-informed approach.

The Biden administration has a unique opportunity to realize Izzie’s vision. Doing so will require a steadfast commitment to transforming our nation’s immigration budget in a way that ensures that our investments match our values.