Borders: Lines in the Sand of Legality and Morality

Juan and Carla (not actual names) had been up since 4:00 a.m. They had driven four hours to find out if a lawyer would represent their son in immigration court, and to see if there was any hope that he would not be “ordered removed” by the judge. The National Immigrant Justice Center, where I work as a paralegal, was the closest organization to them that offers low cost immigration legal services. They wanted to arrive early, before we opened at 8:30 a.m. 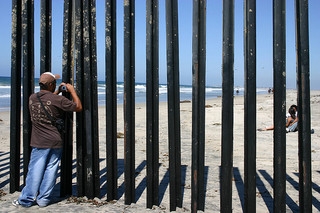 Juan and Carla came from Guatemala in the 1990’s. They could not find jobs, and they did not want to bring up their then-newborn son, Manuel, in such poverty. They left Manuel with their parents, crossed through Mexico and started a new life in the Midwest. “Crossing was easy back then,” they reminded me when I asked whether they had been stopped by immigration officials at the border.

They found work and sent money to their parents to support their son, planning to have him join them when the time was right. When Manuel finished eighth grade, he had exhausted the available educational opportunities in his village. Frequent floods were upending houses, the government seemed unstable, and his parents heard news of daily kidnappings. It was time.

Juan and Carla saved up and paid a “coyote” to take Manuel through Mexico. A friend of theirs gave Manuel his son’s U.S. birth certificate to use as his own. Manuel was interrogated at the border. He had no idea what to say when they asked him what school he went to, what grade he was in, or the names of his teachers in the United States. He was given a “Notice to Appear” in immigration court and sent to a detention center in Chicago for unaccompanied immigrant children.

Someone from my office interviewed Manuel in the detention center to determine whether he had any legal options – he did not. Juan and Carla had never seen a lawyer before. “I’m going to ask you each of you a series of questions,” I explained, “and then we can evaluate whether either of you has a path towards a legal status that could help your son.”

Immigration law is complex, and with all the misinformation in circulation, people often have no idea of their legal options. The Immigration and Nationality Act together with Section 8 of the Code of Federal Regulations, which implements the Act, form a book that is thicker than the Complete Works of William Shakespeare and much more confusing.

Juan, like many of my clients, has been waiting for years for a visa to be available to him based on his U.S.-born sister’s petition, filed on his behalf in 2002. Carla pulled out the U.S. Citizenship and Immigration Services Family Petition Approval Notice. The notices look a bit like money – they share the greenish tint and decorative borders, and they have a watermark of Lady Liberty’s torch. I checked the State Department website and found that Juan would have to keep waiting, probably a few more years, before he could apply for an immigrant visa based on his sister’s petition.

But that wasn’t the bad news. “When the visa finally becomes available, you will have to have a visa interview at the U.S. consulate in Guatemala.” I explained. “But when you leave the States, you won't be allowed to re-enter for 10 years because you have lived here unlawfully for more than one year. There is a waiver, but in order to qualify, you have to prove that your absence would cause ‘extreme hardship’ to your U.S.-citizen or lawful permanent resident spouse or parent.”

Juan did not have a U.S.-citizen or lawful permanent resident spouse or parent. He had had no idea that the petition he had been waiting for would never lead him to permanent legal immigration status. It did not matter that he and Carla now had two U.S. citizen children, fluent in English, who had never known Guatemala. It did not matter that they were taxpaying, churchgoing, and hardworking community members.

Families like these push me to question whether our existing legal and physical borders are really ideal to protect the national security and economic interests of our country. We need borders to keep out those who will not abide by the laws of our society – but as the law stands, there is no feasible way for most people to lawfully seek admission to our society.

To obtain lawful status and the right to work generally requires thousands of dollars in fees and a petitioning family member, or a petitioning business that both wants to hire you and can prove a shortage of U.S. workers with your skill set. You must also gather proof that you, your petitioner or a “joint sponsor” make enough money to guarantee that, until you are a citizen, you will never ask for public benefits such as food stamps or subsidized housing. If you have been living in the United States, you have to show that you have been paying taxes – even if you will never receive social security benefits and do not have the right to work. The entire process takes between one and 23 years, depending on the relationship that forms the basis of your petition and the country which you are from. Mexicans and Filipinos wait the longest.

Some special immigration status categories allow you to bypass these immigration requirements and restrictions in deference to human rights ideals. Asylum, the most famous, offers protection to people fleeing very specific threats. Extreme poverty, drug cartel violence, and random bombings generally do not count. Other types of legal status exist for victims of certain crimes who assist law enforcement with criminal investigations. This creates an incentive to report crimes for a population who otherwise has every reason to fear and avoid the police. Even routine traffic stops by police often lead to detention and deportation, especially since the implementation of the Obama administration’s “secure communities” program.

A few weeks ago I gave a presentation to 30 police officers on the immigration options available to victims of human trafficking. The presenter before me in the daylong "police mini-academy" was an officer from Immigration and Customs Enforcement (ICE).

He told the story of Irma Martinez, a Filipina maid who was enslaved for 20 years by affluent Filipino doctors in the United States. They isolated and manipulated her, paying her only about 1000 dollars a year, sent directly to her family in the Philippines. She worked seven days a week, 52 weeks a year. After an investigation and prosecution, the U.S. courts sentenced the doctors to two years in prison and awarded Ms. Martinez $916,000 in restitution. "These are time-and-labor-intensive cases,” the officer said. “But they’re the most satisfying cases you'll ever work on. You can be a hero."

The officer shared another story. He had been investigating a Chinese restaurant for possible human trafficking and had seen that at the same time each day workers were driven together in a van owned by the same employer. At the end of each day they were driven to the same house, also owned by the employer, where the workers had been living together “like sardines.” The “potential victims” were taken into ICE custody and put up in a hotel during the pendency of the investigation, on the Department of Homeland Security's bill. The traffickers tell trafficking victims that, if they escape, they will be jailed or deported. To ensure some level of cooperation, ICE takes precautions not to realize the very scenario that the victims fear. ICE interrogated each victim. In this case, however, the officer said, "They were found to be unlawfully present, and not victims of trafficking, so we deported them."

These distinctions – between being designated a victim of egregious human rights offenses and being considered a criminal under current immigration law – often feel tenuous to me. Even if the Chinese workers were not trafficked under the law, their deportation would make it impossible to pay back the debts they incurred to enter the United States, placing them and their families at risk of being harmed or killed by the smugglers.

I used to cross borders all the time. I spent my senior year of high school in France, visited friends in Hong Kong, attended a human rights delegation on the Thailand-Burma border, volunteered, taught and researched corruption in Peru. I felt as if I could cross any border and belong, wherever I went. I now realize that this was a huge privilege. As a young, white, American female, I had never tried to cross a border designed to keep me out. Now, I appreciate the strength and violent impacts of borders.

As borders are eroded by digital communication and free trade agreements, maybe we need to consider whether the flow of people, not just the flow of information and goods, should be more fluid, and more importantly, humane.

As we jet-set to learn from other cultures and share our experiences, ideals and expertise, I hope we will consider the policies that govern the flow into our country. Otherwise, we may need to add some fine print to the Statue of Liberty’s ringing sonnet, “The New Colossus, annotated”:

Give me your tired, your poor
[But only if they can prove that they won't ever use public benefits]
Your huddled masses yearning to breathe free
[But only if they have a well founded fear of persecution on account of race, religion, nationality, membership in a particular social group, or political opinion]
The wretched refuse of your teeming shore.
[But not if they have been convicted of crimes involving moral turpitude]
Send these, the homeless, tempest-tost to me,
[But not if they have ever been unlawfully present in the United States]
I [MAY] lift my lamp beside the golden door!
[If I choose to exercise favorable discretion. Other exclusions and restrictions may apply. See the Immigration and Nationality Act for details]

Kelin Hall is a paralegal with NIJC's Counter-Trafficking Project and the Immigrant Legal Defense Project.