(October 2010) — On the first anniversary of the Obama administration’s pledge to overhaul the immigration detention system, including improving human rights conditions for detained immigrants, a report card by a coalition of rights groups shows no significant improvements for the approximately 32,000 immigrants held in the custody of the Department of Homeland Security Immigration and Customs Enforcement (ICE) each day. 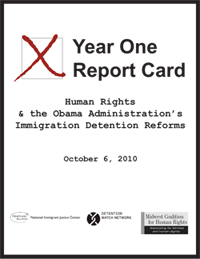