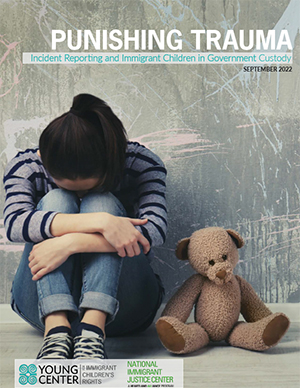 Children who have arrived at the U.S. border without a parent or legal guardian are particularly vulnerable to lasting harm from time spent in U.S. government custody. The federal government’s Office of Refugee Resettlement (ORR) is legally required to care for them and does so through its network of congregate care facilities, where children and youth navigate complex rules and levels of restriction as they await reunification with their families or transfer to long-term foster care. During their time in custody, many children incur “Significant Incident Reports” (SIR), forms that ORR uses to document a wide array of incidents ranging from disclosures of past abuse or neglect to minor rule infractions within ORR facilities, as well as behavioral challenges.

In 2021, the Young Center for Immigrant Children’s Rights and the National Immigrant Justice Center conducted a survey of dozens of service providers to document the impact of SIRs. Our survey revealed:

Despite the central role that SIRs play in the ORR system, very little information about SIRs is publicly available. ORR does not publish data on SIRs and does not proactively share SIRs with children’s legal service providers or attorneys. This lack of transparency has created a system with little accountability or oversight, despite its grave consequences for children.

Based on our survey and analysis, we conclude that a complete overhaul of ORR’s incident reporting system is necessary to ensure that it aligns with ORR’s mandate to ensure the safety and health of children in its care and to prioritize reunification with family.