Report: The One-Year Asylum Deadline and the BIA: No Protection, No Process

(October 2010) — The right to seek asylum from persecution is a fundamental and long-recognized human right. The United States committed to protecting refugees in 1967 when it signed the Protocol relating to the Status of Refugees and later enacted legislation to incorporate the Protocol’s key provisions into domestic law. Despite these commitments, in 1996 Congress enacted a filing deadline for asylum applications which has resulted in potentially denying protections to thousands of legitimate refugees. 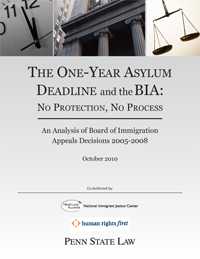 The One-Year Asylum Deadline and the BIA: No Protection, No Process is a collaboration among the National Immigrant Justice Center’s LGBT Immigrant Rights Initiative (formerly National Asylum Partnership on Sexual Minorities), Human Rights First, and Penn State Law’s Center for Immigrants’ Rights. The report is the first to examine how the asylum deadline is handled by the Board of Immigration Appeals, the highest level of administrative appeal available to asylum seekers. The study analyzed 3,472 BIA asylum cases decided in January from 2005 to 2008.

Among the report’s key findings: