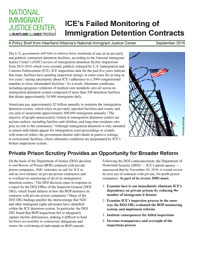 (October 2016) - The U.S. government fails to enforce basic standards of care at its privately and publicly contracted detention facilities, according to the National Immigrant Justice Center’s review of immigration detention facility inspections from 2013-2016 which were recently publicly released by U.S. Immigration and Customs Enforcement (ICE). On the heels of the Department of Justice decision to end Bureau of Prison contracts with private prison companies, NIJC reiterates its call for ICE to end its own reliance on private prison contractors and to overhaul its monitoring of all of its immigration detention centers.

ICE inspections data for the past five years indicate that many facilities have pending inspection ratings, in some cases for as long as two years, raising uncertainty about ICE’s adherence to a 2009 congressional mandate to close substandard facilities. As a result, inhumane conditions, including egregious violations of medical care standards, prevail across an immigration detention system composed of more than 200 detention facilities that detain approximately 34,000 immigrants daily.