Report | Pushing Back Protection: How Offshoring and Externalization Imperil the Right to Asylum 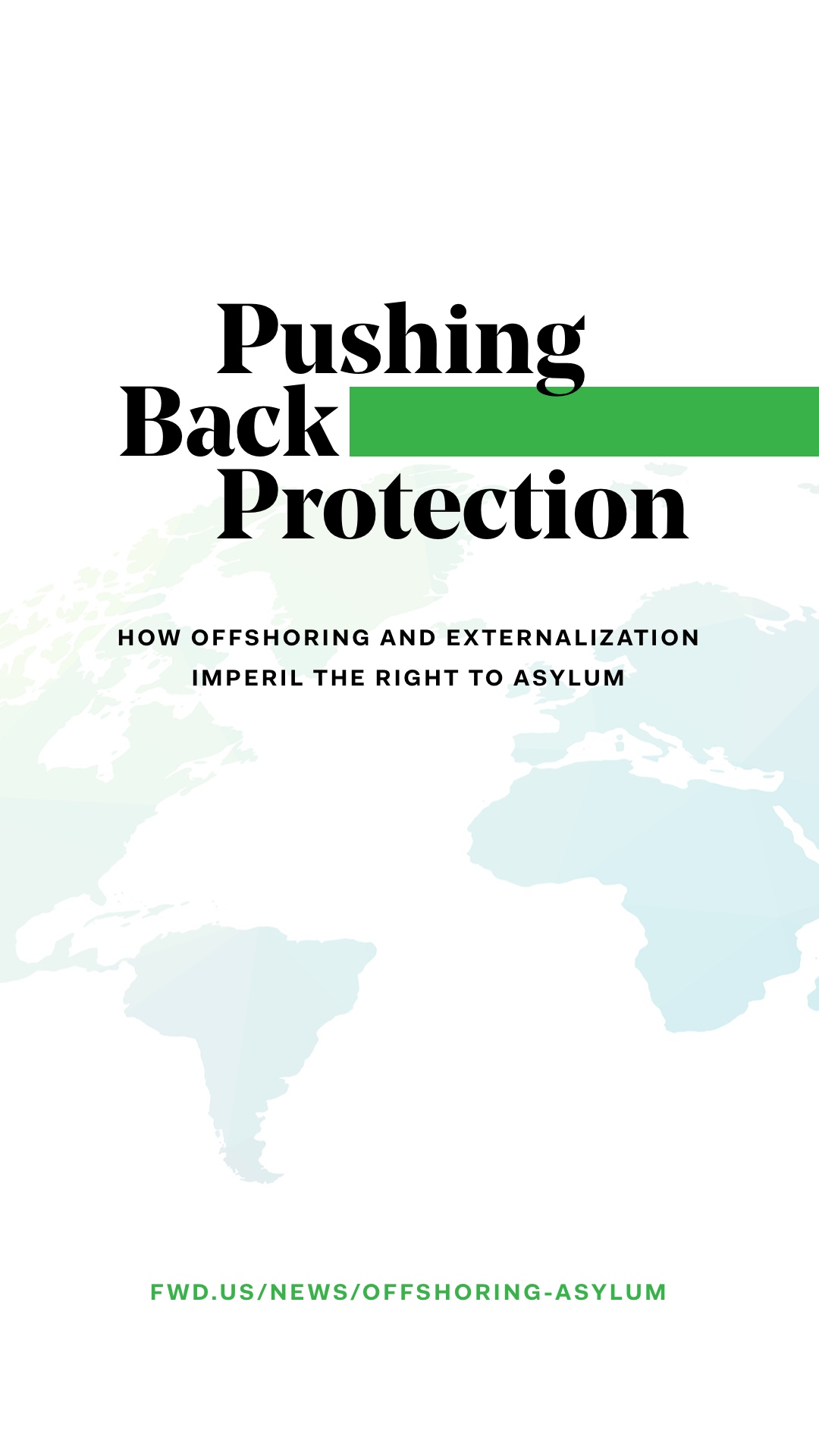 International asylum law first emerged following the Holocaust and other atrocities during World War II. The world bore witness to the genocide of millions at the hands of brutal dictatorships, while powerful nations showed callous disregard for people seeking asylum, turning them straight back to harm’s way. The United States participated in this practice, refusing safety to tens of thousands of Jewish children and adult refugees under the pretext of national security.

From these push-backs emerged two international treaties, the 1951 Refugee Convention and the 1967 Refugee Protocol, which created the framework for asylum law at a global level. Key to this framework is the principle of non-refoulement, which prevents countries from returning asylum seekers to places where they may face persecution or torture. Most nations, including affluent countries such as the United States, Australia, and European Union Member States, ratified these treaties, incorporating the core principle of non-refoulement into their domestic laws. However, in recent decades, with the goal of preventing asylum seekers and migrants from reaching their borders, these nations have chipped away at the principle, claiming compliance with legal obligations while in practice rendering safety elusive for refugees fleeing harm. These policies have caused unimaginable human suffering and loss, particularly for Black, Brown, and Indigenous asylum seekers.

As discussed in Chapter 1 of this report, affluent nations turned to two mechanisms to achieve their goals: offshoring or transferring asylum seekers to other nations for processing or detention under tenuous bilateral agreements; and/or externalization or interfering with the journey of asylum seekers and seeking to halt their arrival through pushbacks by public or private proxy entities. In either case, these nations exert significant influence—reminiscent of their colonial history—on less powerful countries in order to evade their international obligations.

Chapter 2 delves into the European Union (EU) and its Member States’ incessant efforts to halt the arrival of asylum seekers. As far right parties gained political power in Europe, migration policy among the EU and its Member States has become more restrictive and cruel. Politicians frame asylum seekers as an existential threat and their repression a priority. Agreements with Turkey and Libya have resulted in the push-back of asylum seekers to unsafe conditions, including indefinite detention, sexual violence, torture and death. Within the EU, push-backs and other repressive policies persist as well, exemplified by the brutal demolition of camps set up by asylum seekers in France. These policies have been deadly both for those abandoned at sea and those pushed back to danger on land.

Chapter 3 turns to Australia’s so-called “Pacific Solution,” i.e., its categorical bar on asylum seekers arriving by boat over the past two decades. In 2001, less than 500 asylum seekers fled Afghanistan for Australia; despite their modest numbers, they were met with hostility, as Australian authorities took extreme measures to halt their arrival onshore. Australia changed its maritime policy to permit systematic push-backs from Australian and international waters—a policy that endures today. Although detention was already mandatory, Australia further refused to accept asylum seekers onto its land, trapping them instead on islands for years or decades.

Chapter 4 delves into the long history of offshoring and externalization in the United States. First, we detail the U.S.’ experimentation in the late 19th and early 20th century, using Ellis Island and Angel Island to block so-called “undesirable” migrants from reaching the mainland via practices like invasive health screenings and summary deportations. These practices served as the precursor to U.S. push-back and detention policies toward Haitian asylum seekers at Guantanamo Bay in the 1980s and 1990s. Rather than offer them refuge, the U.S. intercepted and pushed back countless Haitian asylum seekers fleeing a brutal dictatorship, while trapping tens of thousands more on a naval base in Cuba. The Supreme Court sanctioned this practice, despite its conflict with the principle of non-refoulement which the U.S. codified in the Refugee Act of  1980.

Emboldened by this lack of accountability, the U.S. entered a new phase of externalization. Under President Trump, the U.S. implemented the “Remain-in-Mexico” Program, the Asylum Cooperative Agreements, and summary expulsions under a specious public health rationale, while continuing to pressure its southern neighbors to thwart asylum seekers.

Chapter 5 explores those recent policies, some of which persist today under the Biden administration. Far from leading the world in protecting the right to asylum, the U.S. has consistently championed offloading its responsibilities towards asylum seekers onto other nations and halting asylum seekers from arriving at its borders.

Our report shows that the United States, Australia, and Europe follow a shared blueprint to externalize their asylum obligations. In its incipient months, the Biden administration has maintained the infrastructure for externalization, through agreements with Mexico and Central American nations as well as its continued policy of summary expulsions. Changing this course would have a reverberating impact on the rest of the world—not only keeping asylum seekers safe but promoting meaningful compliance with the non-refoulement principle.

Recommendations
Ending these policies which deny asylum seekers their legal rights is within reach. To do so requires exposing underlying assumptions that inform externalization policies. Brick by brick, the United States, Australia, and European Union Member States have walled off asylum seekers and returned them to harm. This report calls on the United States government to dismantle these policies and uphold the right to asylum by incorporating the following recommendations:

This report was co-authored by the National Immigrant Justice Center (NIJC) and FWD.us.