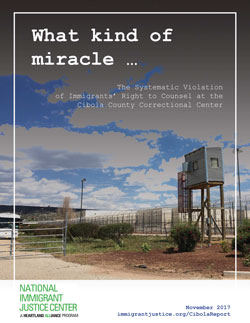 MILAN, New Mexico – In its report, What Kind of Miracle, released today, the National Immigrant Justice Center (NIJC) exposes the Department of Homeland Security’s (DHS) systematic violation of immigrants’ due process rights at the for-profit Cibola County Correctional Facility here. NIJC’s comprehensive survey of immigration legal service providers found that the opening of this isolated and massive immigration prison has left hundreds of detained immigrants without meaningful access to counsel as they face deportation. In most cases, individuals facing permanent separation from families or exile to places where they face persecution are left to defend themselves in complex court hearings.

As Congress considers the Trump administration’s request to fund its massive expansion of the immigration detention system, NIJC calls on lawmakers to refuse the use of taxpayer dollars to lock up people without access to lawyers, and demands that DHS discontinue the detention of immigrants in circumstances such as those trapped in Cibola.

“The hurdles immigrants at Cibola face when they try to find a lawyer are not an anomaly – they are the norm,” said Heidi Altman, NIJC’s director of policy and the report's author. “DHS knows that jailing people far from their loved ones and far from lawyers strips them of their ability to effectively defend against deportation. Building more prisons to detain more immigrants in isolated locations is central to the administration’s all-out attack on immigrant communities in the United States.”

DHS pays CoreCivic, formerly known as Corrections Corporation of America, at least $2.5 million monthly to detain up to 1,100 immigrants at the Cibola prison. DHS re-opened the prison in October 2016, three months after the Department of Justice ended its contract with the facility following reports of severe human rights violations.

More key findings from the report include: