As public support grows, Senate victory hoped to carry over into House of Representatives

In an important victory for a diverse coalition of communities, the Illinois Senate today passed the TRUST Act with a vote of 31 to 21. As Illinois and other governments across the country seek to protect their residents from federal anti-immigrant policies that are terrorizing communities and separating families, members of the Campaign for a Welcoming Illinois applaud Senators who understood the dire need to enact state-level safeguards in Illinois.

The TRUST Act (SB-31) creates a bright line between local police and federal immigration agents, and sends a message to Illinois’ immigrant residents that seeking police assistance will not result in their deportation.

“If someone is going to be detained in Illinois it should be because an actual crime has occurred, not because of how they look, what they believe or what paperwork they may or may not have. This proposal reinforces the message that our immigrant neighbors are in fact part of our community. It is my hope that this legislation will enhance interaction between the immigrant community and state and local police to improve safety and the quality of life for all Illinoisans,” said Illinois Senate President John J. Cullerton, sponsor of the TRUST Act. 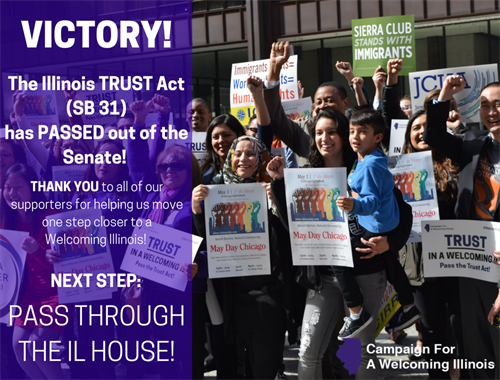 Representatives Lisa Hernandez (D-24) and Emanuel Chris Welch (D-7) plan to co-sponsor the TRUST Act as it moves from the Senate to the House next week.

“At a time when many of our neighbors feel under siege because of federal policies that seek to turn our communities against one another, and when local businesses are struggling because their customers are staying home rather than risk an encounter with police that might result in deportation, it is incumbent on Illinois’ elected leaders to do whatever we can to show our communities we have their backs, and we will do whatever it takes to ensure their safety,” said Rep. Hernandez. “I take this responsibility personally, and because of that I will fight to help pass the TRUST Act this month.”

“The TRUST Act is a concrete way to show the people in my district and across Illinois that we want to be a welcoming state,” said Rep. Welch.  “I’m confident that my fellow Representatives will see the need for protective legislation for immigrants and refugees amid an uncertain political climate. The TRUST Act is the most timely and important safeguard Illinois can enact to help protect our communities against a national agenda of xenophobia and racism.”

The TRUST Act’s main provisions will:

Members of the Campaign for a Welcoming Illinois will continue to have a presence in Springfield throughout the month of May to move the Illinois TRUST Act through the House. Latino Unity Day on May 10 and Asian American Action Day on May 17 will be moments when House members can expect to hear from our communities.

"When immigrants do not have to fear that any interaction with the police may result in their being banished from their homes and families, all of our communities are safer," said Mary Meg McCarthy, executive director, National Immigrant Justice Center. "We are grateful to Illinois' leaders who have stood up and spoken out to defend our immigrant neighbors, and to Illinois senators who advanced the TRUST Act. We are hopeful that the Illinois House and Governor Rauner will follow their lead."

“We are encouraged today to see State Senate members supporting immigrant and refugee communities in Illinois,” said Lawrence Benito, chief executive officer of Illinois Coalition for Immigrant and Refugee Rights. “Support for the TRUST Act continues to build. Our members and allies are doing amazing work educating legislators and other stakeholders about the importance of the TRUST Act, and we will continue to organize support in the House to place a bill on Governor Rauner’s desk by the end of May.”

"The TRUST Act will make all communities more secure. This law is personal to me because it means that the safety of my family will be greatly improved, knowing that our local law enforcement will not collaborate with ICE to deport people without a court-issued warrant gives me hope of what can be accomplished in our state during the era of Trump ." Estela Vara, a community leader from P.A.S.O. - West Suburban Action Project, a sponsor organization of the TRUST Act.

“Passing the TRUST Act through the Senate is an incredibly important victory for our community, particularly for those who are victims of domestic violence and sexual assault,” said Neusa Gaytan, Interim Executive Director and Senior VP of Programs of Mujeres Latinas en Accion, a sponsor organization of the TRUST Act. “This can be a life or death situation for many of our clients, with the Trust Act  immigrant survivors will be given peace of mind that they can ask for help"

Organizations who have signed on to support the IL TRUST Act include: