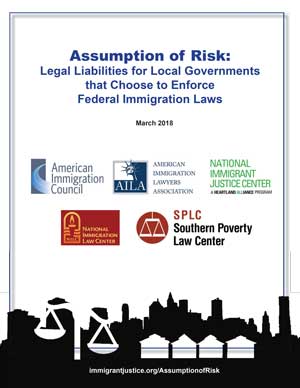 WASHINGTON, D.C. - Five leading immigrant and civil rights organizations issued a joint report today detailing the illegalities inherent in each of the U.S. government’s repeated attempts to enlist local law enforcement authorities to arrest and detain people on behalf of U.S. Immigration and Customs Enforcement (ICE). The report, Assumption of Risk: Legal Liabilities for Local Governments that Choose to Enforce Federal Immigration Laws, was written by attorneys from the National Immigrant Justice Center, American Immigration Council, American Immigration Lawyers Association, National Immigration Law Center, and Southern Poverty Law Center, who have successfully challenged these practices in courts throughout the country. It describes the legal liabilities local governments face when they honor ICE requests, known as “detainers,” to hold individuals past the completion of their criminal custody until immigration agents take them into administrative custody.

“It’s this simple: ICE is asking local law enforcement to break the law,” said report co-author Mark Fleming, associate director of litigation at the National Immigrant Justice Center. “The Trump and Obama administrations have made the ask in a half-dozen different ways, involving a half-dozen different combinations of paperwork, but they have not managed to change the fundamental fault that the courts continue to point out: detainers are illegal."

ICE detainers have been at the center of high-profile clashes between the Trump administration and the local and state governments that refuse to honor them, including retaliation threats by the Department of Justice. Local and state police departments argue that transforming their officers into immigration agents undermines public safety. Today’s report goes much further, explaining the numerous ways in which detainers subject local governments to legal liability.

The report’s co-authors, all of whom are available for consultation and interviews about their findings, offered the following comments:

"Localities must arm themselves with the facts and a deep understanding of the legal consequences of detainers when considering whether to collaborate on immigration enforcement" said Josh Breisblatt, senior policy analyst at the American Immigration Council. "Detaining immigrants at ICE's request subjects local jurisdictions to a great deal of liability and has a chilling effect on the community's willingness to cooperate with police."

Alyson Sincavage, American Immigration Lawyers Association (AILA) senior legislative associate, noted, "AILA members across the country see the detrimental impact when the federal government attempts to force local law enforcement officials to shoulder the responsibility of immigration enforcement. It is vitally important for local police to build trust between themselves and members of their communities for everyone's safety. Every American is now on notice of how the federal government is eroding that vitally important trust. This report should galvanize local leaders and officials who rightly choose to prioritize community safety over constitutionally suspect actions by the federal government."

“From day one, this administration has used coercive and aggressive tactics to recruit local law enforcement to do the work of federal ICE officers, despite a long track record in our courts and in our communities that shows why this entanglement of criminal justice with civil immigration enforcement is costly and dangerous,” said Avideh Moussavian, senior policy attorney at the National Immigration Law Center. “As this report shows, even though ICE continues to sell different ways for local sheriffs and law enforcement to detain immigrants, these jurisdictions will still be exposed to liability for potential constitutional violations and create a less safe environment for all their residents."

“Sheriffs should be forewarned, entering into arrangements with ICE to enforce immigration law will not protect them from liability for detaining individuals without probable cause of having committed a crime,” said Shalini Agarwal, managing attorney of the Southern Poverty Law Center’s Florida office. “These arrangements create fear and will have the perverse effect of damaging public safety by scaring away immigrant communities from contacting the police about actual criminal activity.”