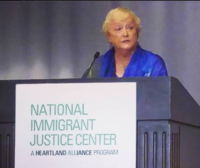 Thank you, Judge Williams for introducing me here today and thank you to the National Immigrant Justice Centre for giving me this wonderful award and for inviting me back to Chicago where I spent a very happy time last year at the University of Chicago. As you have just heard I was a negotiator and signatory to a peace accord in Northern Ireland in 1998.  When I became a signatory to the Good Friday Agreement, I knew that peace had to be built, from that day on, on the vindication of the human rights of all.  I am glad we signed it on Good Friday and not Pancake Tuesday as it wouldn’t have the same ring to it.  But I am also glad that we worked hard since then to make every Friday a good Friday. And as the suffragists pointed out, it is deeds not words that make the difference.  In three weeks the country I live in will ask the people in a referendum whether they want the UK to remain in the European Union. On June 23rd, if Britain says NO to remaining in the EU, then some of those deeds built into the peace agreement will be reversed, the European Convention on human rights will no longer apply and the border between north and south of Ireland will be reinstated. Our precious peace process could once again be placed in jeopardy.  And the reason this time is because people are being encouraged to Brexit – to exit Europe – through their fear of immigration.