The National Immigrant Justice Center’s (NIJC’s) three-year Freedom of Information Act (FOIA) litigation has resulted in the most comprehensive public release to date of Department of Homeland Security (DHS) immigration detention center contracts and inspections. The thousands of pages of documents provide an unprecedented look into a failed system that lacks accountability, shields DHS from public scrutiny, and allows local governments and private prison companies to brazenly maximize profits at the expense of basic human rights.

NIJC’s pursuit of transparency and accountability began in April 2011 with a FOIA request  seeking all U.S. Immigration and Customs Enforcement (ICE) detention facility contracts, as well as inspection reports dating back to 2007. Notwithstanding President Obama’s 2009 directive to increase government transparency, it took four years, one federal lawsuit, two depositions of ICE officers deemed experts in immigration detention contracting and inspections, and a federal court order to obtain documents for more than 100 of the country’s largest detention facilities. The average daily population for these facilities represents approximately 92 percent of the 33,400 detention beds ICE maintained on an average day in 2012 (the most recent year for which NIJC obtained documents). (See Fig. 1)

For this first of a series of reports, NIJC has reviewed and posted 90 contracts, four partial contracts, and the deposition testimony of a former ICE contracting officer who describes the agency’s contracting processes.
Links to the ICE contracts are at immigrantjustice.org/TransparencyandHumanRights
We owe significant gratitude to a team of pro bono attorneys from the global law firm Dentons US LLP, who represented NIJC in the litigation and depositions. Several of NIJC’s findings reflect those in an October 2014 Government Accountability Office (GAO) report, which highlighted the lack of uniformity in how ICE tracks expenditures within and across facilities and criticized ICE’s lack of explanation for why it has allowed many facilities to lag in implementing the most current ICE detention standards. NIJC will release a second report analyzing hundreds of ICE inspection reports later this year.
NIJC’s review of the contracts reveals:

To address these issues, NIJC calls on ICE to:

NIJC calls on Congress to increase government transparency and improve oversight of ICE by passing the following two pieces of legislation:

On January 21, 2009, President Obama’s first full day in office, he announced his intent to set an open tone for the federal government under his administration. In a memorandum encouraging greater government transparency and accountability, the president directed then-U.S. Attorney General Eric Holder to issue new FOIA guidance to all executive departments and agencies.

About eight months later, the Obama administration announced reforms to the immigration detention system, including ways to reduce detention, standardize contracts, and implement more oversight over facilities using a more “civil” model. Advocates championed these goals, which also were supported by an expert consultant hired by the Obama administration to conduct an in-depth evaluation of the detention system.

Six years later, the sprawling DHS detention system has only grown farther from those civil detention reform goals. Instead of reducing detention, the administration now incarcerates women and children who flee to the United States seeking protection from persecution. While NIJC’s FOIA did not specifically request family detention center contracts, two of which did not exist in 2011, recent reports have questioned the morality of detaining families and the manner in which family detention center contracts are negotiated. This report does not address family detention, however many of the concerns arising from the detention of families are similar to concerns with the entire immigration detention system, including reports of unreasonably high bonds (particularly for asylum seekers), hunger strikes, deaths, suicide attempts, and inadequate medical care.

ICE remains as secretive as ever about its detention contracting and inspection processes. ICE does not proactively share information about contracts and inspections and has done so only when forced via FOIA requests. The little information ICE does release pursuant to FOIA lawsuits is far from transparent. For example, most of the contracts and inspections posted on the agency’s FOIA Library website are outdated. ICE does not publicly share which facilities are open or closed. Moreover, the increased use of private contractors and sub-contractors further obfuscates how billions of taxpayer dollars are distributed and used to negotiate these contracts. Corporations take advantage of their private entity status to invoke redactions regarding funding allocations and avoid direct liability for sub-standard conditions.

ICE divides its detention facilities into four categories, which dictate the execution and often the terms of each contract (See Fig. 2):

Contract Detention Facilities (CDFs): Facilities owned and operated by private corporations that contract directly with ICE. ICE officials have stated that these facilities, often built just to detain immigrants, are subject to the 2011 PBNDS.

A myriad of complex federal contracting protocols, statutes, and regulations, most notably the Federal Acquisition Regulation, govern CDF contracts. Congress’ appropriations process allocates funds to pay the contractors and contract line item numbers (referred to as “CLIN” in the contracts) track facilities’ expenses and how money is paid. As a result, deciphering how much taxpayers pay for these facilities, and how these private contractors allocate money to run the detention centers, is nearly impossible for anyone who is not an expert in government appropriations and contracting.

Intergovernmental Service Agreements (IGSAs): Facilities owned and operated by local governmental entities, most often county or city governments. Many local governments in turn subcontract with private corporations to administer and provide services. While private corporations have garnered the most attention for warehousing immigrants for profit, NIJC has found that even local governments seek to maximize profits from the detention space they rent to ICE. At some facilities, such profit motives have resulted in cost-cutting on a range of basic needs for immigrants, such as medical care, food, and hygiene products. Other county governments have hired consultants to navigate the obscure process of negotiating higher per diem rates. Some IGSA facilities hold individuals in ICE custody exclusively and are referred to as “dedicated IGSAs” or “DIGSAs.” NIJC did not discern any particular differences between IGSA and DIGSA facility contracts. In fact, the contracts themselves do not denote whether the facility is a DIGSA.

U.S. Marshals Service (USMS) Intergovernmental Agreements (IGAs):  Facilities under contract with the Department of Justice’s U.S. Marshals Service. Typically, these contracts pre-date the 2003 creation of DHS, and continue to be renewed via the U.S. Marshals, though subsequent amendments (also referred to as “modifications”) list ICE as a party to the contracts. Initially, in NIJC’s litigation, ICE claimed not to have USMS contracts under its “custody or control,” but began producing these contracts following a court order. Because many of the USMS IGAs were initiated before the creation of the first ICE detention standards, they often do not reference clear applicable standards for detaining immigrants. Further, most of the USMS IGAs are of indefinite duration.

Where possible, NIJC has annotated the following in the contracts posted at immigrantjustice.org/transparencyandhumanrights: 1) type of contract, 2) per diem rate, 3) contract effective and expiration dates, and 4) applicable ICE detention standards. We also have noted any additional specific standards incorporated into the contracts, such as DHS Prisoner Rape Elimination Act regulations, various versions of ICE directives on Sexual Abuse and Assault Prevention and Intervention, and ICE’s 2011 Review of the Use of Solitary Confinement.

NIJC’s months-long review of the thousands of pages of contract documents revealed:

ICE’s transparency problem is a human rights problem. As Grassroots Leadership found in its April 2015 report, when the U.S. government allows private companies and local governments to profit by warehousing people far from public scrutiny and government accountability, no matter how “civil” the detention facilities appear, the men, women, and children in custody become little more than inventory.

A 2015 report by the Detention Watch Network and the Center for Constitutional Rights highlights the “guaranteed minimums” contained in some ICE detention contracts, which bind the government to pay for a minimum number of detention beds and places pressure on immigration officials to incarcerate immigrants to meet those quotas.  The experiences immigrants describe once they are within the walls of the isolated detention centers show how the system reduces human lives to mere fodder in a business transaction.

NIJC staff recently visited the Eloy Detention Center in Arizona, an IGSA facility which the City of Eloy subcontracts to CCA. During the visit, a man detained there for more than two years shared his frustration at the recent “rationing” of hygienic supplies and food, echoing similar complaints that NIJC has heard from individuals in DHS custody at other facilities. Given the multimillion-dollar Eloy contract, it is unconscionable that the facility would lack toilet paper and food to meet the daily needs of the men and women in its care.
NIJC invites the public to scrutinize the ICE contracts, particularly for detention facilities in their own regions, and voice concerns to ICE and representatives in Congress.

2. Require all detention facilities to immediately adhere to the 2011 Performance-Based National Detention Standards, and terminate contracts for facilities which are unable or unwilling to meet these standards.

3. End the practice of entering into indefinite contracts and revisit any existing contracts which do not contain explicit renegotiation dates.

4. Refrain from contracting with private corporations or other entities that require guaranteed payments for a minimum number of immigration detention beds, and modify existing contracts to remove guaranteed bed minimum payments. If the contractor is unwilling to make such a modification, ICE should terminate the contract.

5. Throughout the contracts negotiation process for individual detention facilities, engage with legal service providers, faith groups, and other local and national non-governmental organizations that visit facilities, to address human rights and due process issues they observe.

NIJC calls on Congress to increase government transparency and improve oversight of ICE by passing the following two pieces of legislation:

1. Accountability in Immigration Detention Act, sponsored by Rep. Adam Smith (D-WA): Originally introduced in 2014 and re-introduced in 2015, this bill establishes minimum detention standards to ensure that everyone in immigration detention is treated humanely. The bill requires all detention facilities to comply with the most recent detention standards and subjects non-compliant facilities to “meaningful” financial penalties. In addition, the bill mandates public disclosure of all contracts, memoranda of agreement, evaluations, and reviews related to immigration detention facilities.

The principal authors of this report are NIJC Director of Detention Services Claudia Valenzuela and NIJC Director of Communications Tara Tidwell Cullen, with research and editing contributions from NIJC colleagues Jennifer Chan, Mark Fleming, John Foerester, Catherine Matthews, Mary Meg McCarthy, Royce Bernstein Murray, Kathleen O’Donovan, Katherine Rivera, and Julia Toepfer.
Sincere thanks to pro bono attorneys at Dentons US LLP, who represented NIJC through more than three years of Freedom of Information Act litigation.
Additional thanks to Assistant Professor John Eason, Professor Pat Rubio Goldmsmith, and their team at the Texas A&M Department of Sociology, Professor David Hernández at Mount Holyoke College, Detention Watch Network, and Grassroots Leadership, whose review of thousands of pages of documents and feedback were critical to this report and to the launch of NIJC’s Immigration Detention Transparency and Human Rights Project.

On December 12, 2015, the following corrections were made to this report's text and charts: 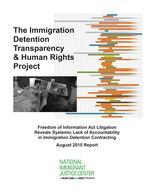