Raquel came to the United States as an asylum seeker fleeing persecution she suffered because she is transgender. Instead of finding safety, however, she was arrested by the Department of Homeland Security (DHS) and detained at county jails in Illinois and Wisconsin. She describes her experiences in DHS custody as “living in hell.” She was physically assaulted, placed in solitary confinement, and called degrading names. Even after she was released and granted immigration status, she continued to suffer emotional trauma that stemmed from her abuse in detention.

The Prison Rape Elimination Act (PREA) would go a long way to protect detained immigrant women like Raquel from abuse. On International Women’s Day, please speak out in solidarity with Raquel and tell President Obama to do whatever it takes to ensure no other woman has to suffer as she did. 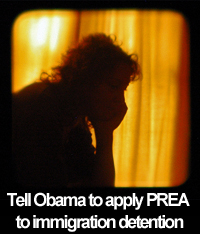 Tell President Obama to apply PREA’s protections to all inmates in the United States, including those in immigration custody.

Today, women are a part of America’s immigration story more than ever before. They accounted for nearly half of all refugees and more than half of newly naturalized citizens in 2010. They are business owners and breadwinners and caretakers. The future of our country will rely a great deal on the wellbeing of immigrant women.

But because of the government’s expanding immigration dragnet, more immigrant women are being subject to detention. Once they are locked up, immigrant women are particularly vulnerable to sexual violence. Language barriers and fear of retaliation prevent them from reporting violations. Many suffer from Post-Traumatic Stress Disorder or aren’t able to find attorneys to help them safely hold their abusers accountable.

As you celebrate International Women's Day, please join NIJC's PREA campaign in solidarity with Raquel and in defense of other women who remain at risk.

Tell President Obama to apply PREA’s protections to all inmates in the United States, including those in immigration custody.