Report | Invisible in Isolation: The Use of Segregation and Solitary Confinement in Immigration Detention

(September 2012) — Immigrants in detention facilities around the United States often are subjected to punitive and long-term solitary confinement and denied meaningful avenues of appeal, according to an investigation by Heartland Alliance's National Immigrant Justice Center (NIJC) and Physicians for Human Rights (PHR). The two human rights groups surveyed conditions in more than a dozen detention centers and county jails that contract with U.S. Immigration and Customs Enforcement (ICE). The result is the first comprehensive examination of the effects of solitary confinement on immigration detainees. 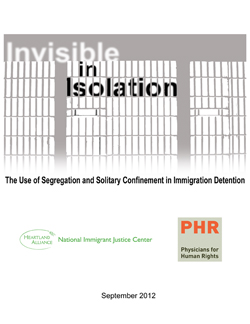 In the report, NIJC and PHR call on ICE and Congress to end solitary confinement in immigration detention, severely limit other forms of segregation, and implement stricter oversight of the detention system.