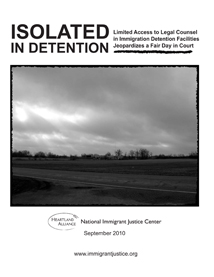 A survey of U.S. immigration detention facilities by Heartland Alliance's National Immigrant Justice Center (NIJC) shows that as the Obama administration detains more immigrants than ever before, many lack access to affordable legal services because they are held in remote locations and non-governmental organizations (NGOs) are unable to meet the staggering demand for legal assistance. The report, Isolated in Detention: Limited Access to Counsel in Immigration Detention Facilities Jeopardizes a Fair Day in Court, also finds that policies which restrict detainees from contacting lawyers by phone further isolate many of the estimated 32,000 women and men detained every night by the Department of Homeland Security (DHS).

"Our survey found that the government is detaining thousands of men and women in remote facilities where they have extremely limited access to counsel." said Mary Meg McCarthy, executive director, National Immigrant Justice Center. "In some facilities, it is impossible for detained immigrants to find attorneys. As long as the government chooses to engage in the unnecessary, expensive and inhumane detention of men, women, and children who are not dangers to our communities, significant barriers will prevent a fair day in court for detainees."

Among the survey's key findings:

Recommendations to Improve Access to Counsel for Detained Immigrants

The over-use of detention has far-reaching negative effects. NIJC calls on the Obama administration to end the unnecessary detention of women and men who pose no threat to society and to request appropriations from Congress to expand alternatives to detention programs where appropriate. NIJC recommends that DHS locate detention facilities only near cities which have established pro bono attorney networks willing to represent immigrant detainees. Furthermore, the immigration agency should ensure that detained immigrants can contact their attorneys by phone, allow legal service providers to arrange private phone calls with detainees, and allow detained immigrants to make free calls to legal aid organizations.

The U.S. Department of Justice (DOJ) also must help protect access to legal counsel for detained immigrants. NIJC calls on the DOJ to make the federal Legal Orientation Program, which provides basic legal information to detained immigrants, available in all immigrant detention facilities. The DOJ should also allow immigration judges to appoint legal counsel for particularly vulnerable individuals, such as children or people with disabilities. Finally, the DOJ should work with Congress to make the Legal Orientation Program available nationwide and to permit use of funds for direct representation when an immigration judge appoints an NGO to represent a detainee.

The Isolated in Detention report highlights federal detention cost estimates which show that ensuring detained immigrants have access to counsel through expanded legal orientation programs and alternatives to detention would save taxpayers hundreds of thousands of dollars per year. Effective alternatives to detention, which have already been piloted and would allow immigrants better access to attorneys, cost an average of $12 per detainee per day compared to the $122 it currently costs to detain someone.

"Without fundamental change in the U.S. government's approach to immigration enforcement, Americans will continue to pay a high price for an unsustainable system that erodes American ideals of justice and human rights." McCarthy said.

The report is available at www.immigrantjustice.org/isolatedindetention